An Evening in Grand Haven

The main reason for a late summer visit to Michigan was to celebrate my mom's birthday. For the celebration itself, she had requested that we make a short trip to the lake town of Grand Haven for dinner, so one afternoon we all piled into the car and drove west. Located on Lake Michigan at the shore of the Grand River, Grand Haven is one of several picturesque beach towns in Western Michigan. 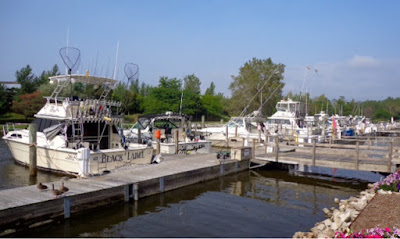 Blessed with a fantastically mild summer's day, we arrived before dinner to stroll near the water and enjoy the waning warmth of August. After parking near the marina on the river, we walked along the boardwalk until my brother-in-law spotted the sailboat on which he'd recently taken some foreign business associates. The captain invited the kids on board -- they particularly enjoyed watching the adorable little dog who makes his home on the boat, and who is also a Michigan State fan like my nephew. (I did not manage a good photo of the pup in his kelly green MSU jersey.)
We continued our stroll, but stopped to take some photographs, and to watch both boats and people coming and going. It truly was one of those gorgeous summer evenings that you wish would not end!
However, we had dinner plans and made our way to the restaurant, Snug Harbor, which is located on the River. Although it does offer some outdoor seating, we sat inside, but next time I would certainly sit on the patio or find another restaurant, as this establishment's redeeming quality seemed to be location. (Though I must say the kids' portions were very generous, and my niece and nephew both enjoyed their mac-and-cheese and chicken tenders. Two of the adults also had meals that were quite tasty.) 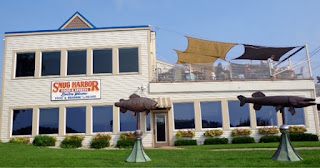 After our meal we drove to the lakefront to continue savoring the weather and good cheer. It's possible we may have parked illegally, as the beach  is part of Grand Haven State Park, and one needs a special permit to park in the lot, yet it was late enough that open spaces were available and no one seemed to be checking. My niece immediately discovered the playground, while my nephew noticed the paradise found just beyond it - twenty-one beach volleyball courts! He stood next to an ongoing game, watching intently, then was transported to cloud nine when the incredibly friendly folks invited him to join their game. 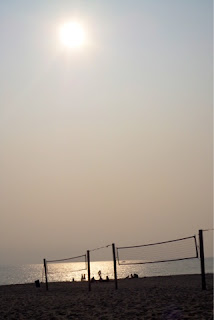 My nephew and brother-in-law were busy playing ball, but my niece realized the warm soft sand was perfect for other games as well.

I had wanted to walk out to the lighthouse, but we determined that the stroll was a bit too much for our capabilities or needs on that evening. Plenty of other people, however, were making their way down the long pier to one of Michigan's iconic lighthouses. 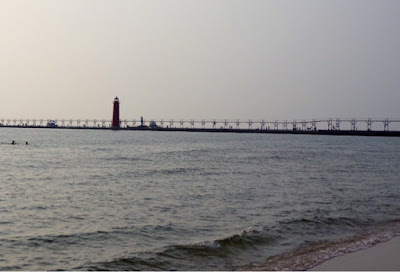 Then it was time to find ice cream for dessert, and after our treats we headed home. Due to its late starting time (9.50pm on that particular date), we couldn't stay for Grand Haven's famous musical fountain, though I would love to see that some day! (Interestingly, the large anchor which overlooks the river was until very recently a cross.) Judging by the short time we spent in Grand Haven, it is certainly a place to which I would happily return. 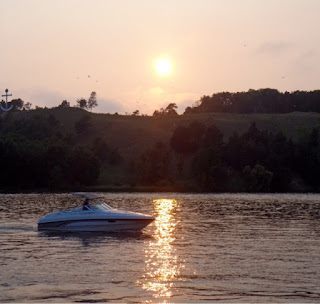 Considered one of the best gardens in the United States, Frederik Meijer Gardens & Sculpture Park in Grand Rapids is now an even more attractive destination thanks to the recent additon of the DeVos Japanese Garden. After three years of work, the garden was unveiled in June, and it was at the top of my "must do while in Grand Rapids" list during a late summer visit.


Meijer Gardens are worth visiting any time of year. I have visited what is arguably Grand Rapids' best known attraction at least a half dozen times, therefore I was excited to see something new. Earlier this summer the Wall Street Journal published an article which described two Japanese gardens in the United States - this one and the garden at Boston's Museum of Fine Arts.

We headed straight toward the new section. On our way we passed the iconic sculpture "The American Horse," an imposing 24-foot tall horse by American artist Nina Akamu. Although this monument dates from 1999, it was partially inspired by a work created by Leonardo da Vinci in the 15th century. 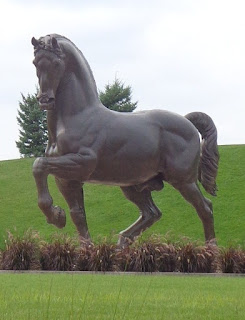 As we approached the gate to the eight-acre large Japanese garden, my niece immediately noticed a quiet fountain and ran over to investigate. 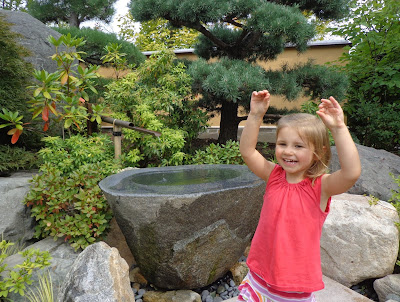 Upon entering the garden we were greeted by a volunteer who offered a map, and kindly pointed out a feature we may have missed otherwise: the locations of 13 large stones with poems engraved on them. These are based on Japanese poetry. 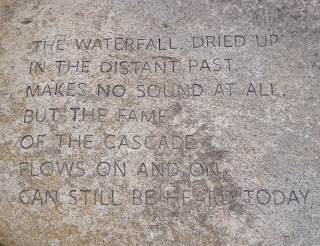 The centerpiece of the garden is a large pond, and the path a visitor follows takes her around the pond. 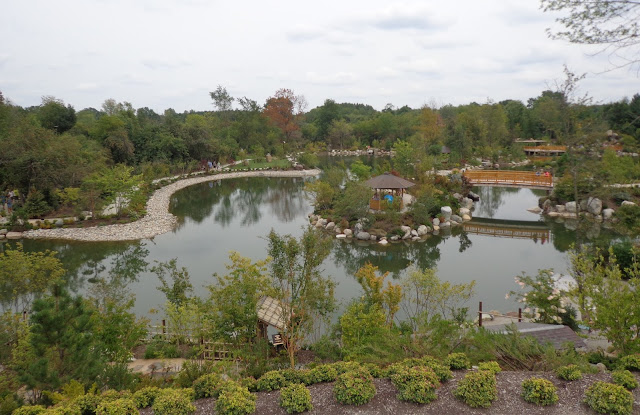 Naturally, there are many other features - small waterfalls... 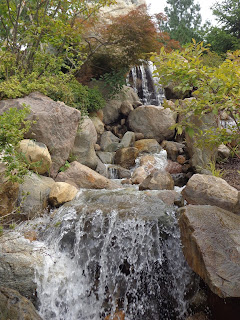 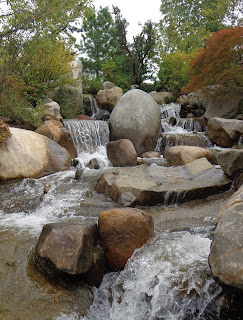 sculptures, both in the water...
and on land... 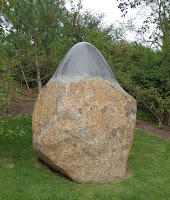 fountains, a boardwalk along one portion of the pond, a bridge or two, a Zen-style rock garden... 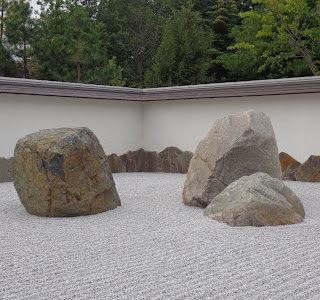 short side paths, a bonsai exhibit... 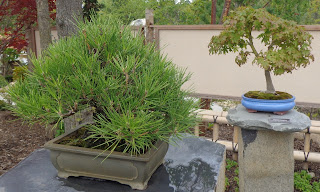 even a tiny island with a gazebo. 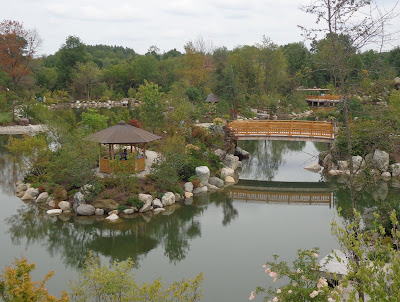 The tea house, sadly, is only open infrequently.


Given that we were in the company of a three year old who tends to be easily excited and was continually running ahead to seek out the next cool thing, our stroll was not exactly leisurely, but we certainly enjoyed our inaugural visit. My sister commented that this was a place where she would willingly take a walk every week. Certainly, if you are ever in Grand Rapids, Meijer Gardens are well worth a visit! More information about the Japanese Garden can be found on the Meijer Gardens' blog post listing FAQs. 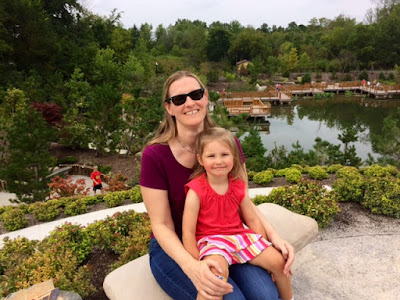 Inspired by a Latvian blogger, Inga, who in turn was inspired by a Huffington Post blog post, I am joining in the "first sentences challenge." The idea is simple -- select and share the first sentence from five books. Inga suggested that the lines should be from books you have read recently. I mostly chose books that I have read in the last few years, however to increase the diversity, also selected one from a Latvian language book enjoyed long ago. To keep with my literary theme for this year, which involves picking more books by woman authors, four of the chosen selections are by women.

"I still don't know why Sallie and I bothered to go to that party in the forest slope above Aspen." Rebecca Solnit, Men Explain Things to Me

"The day after Lula's lawyer called to tell her she was legal, three Albanian guys showed up in a brand-new black Lexus SUV." Francine Prose, My New American Life

"It was too late to pretend he hadn't seen her." Adelle Waldman, The Love Affairs of Nathaniel P.


"No one is left from the Glenn Valley, Pennsylvania, Bridge Club who can tell us precisely when or why the group broke up, even though its forty-odd members were still playing regularly as recently as 1990, just as they had done for more than a half a century." Robert B. Putnam, Bowling Alone: The Collapse and Revival of American Community


You are welcome to join in by sharing a first sentence in the comments, or several on your blog! Paldies, Inga, par jauko ideju!
Posted by Dziesma at 6:57 PM No comments: