Quite a few Latvian-Americans are getting ready for this summer's big 50th anniversary celebration in Garezers. If you are planning on participating, you can still buy tickets online (only $100 gains you entrance to almost every single event over the entire schedule events, and saves you from needing to buy individual tickets on-site), volunteer to help with a project this spring or during the festivities, or sponsor the documentary film that's currently in the works!

If you have not yet seen the film's trailer, I suggest checking it out. Currently it's in Latvian, but I have heard English language subtitles are in the works, and subtitles are planned for the full movie. The music and scenery in the trailer are impressive on their own. Filmmaker Māra Pelēcis spent many hours last summer interviewing people who represent Garezers and its history, and has gathered old photographs from the last fifty years for use in the film. For only $25 you can support the film, see your name in the credits, and receive a copy of the DVD. Other sponsor categories also exist, with appropriate "goodies."

Occasions such as this anniversary call for memorable photos. This is a classic from 1979 that my mom found in our family's albums.The vast majority of those kids (now adults, many with children of their own) still visit Garezers regularly. 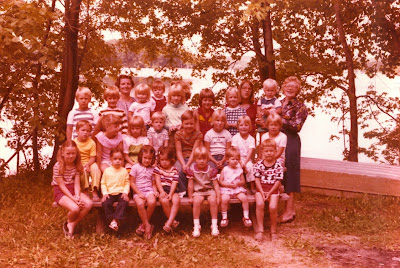 May 4 is Restoration of Independence Day in Latvia, and this year was the 25th anniversary of Latvia's declaration of independence from the Soviet Union. I posted the following elsewhere, and thought I would share it with you, as well.

So happy that Latvia is celebrating its 25th anniversary since regaining independence, and grateful for the many people in Latvia and abroad who for many years dreamed of and worked toward that goal. Was reminded of some of the things we used to do here in the US in the 80s and early 90s - demonstrations at the federal government buildings in our cities, letter writing campaigns to our Congress representatives (when one actually had to write and mail a letter), letters to the editors of local newspapers, occasionally even traveling several hundred miles to DC for big demonstrations.
One of the more unique things may have been the "hotline" located in my family's basement in the very late 80s/early 90s. This was, of course, back in the day before the instant communication we are all accustomed to now. Every day my dad collected news from various sources (including from people's phone calls with friends and family in Latvia) on current events in Latvia and the other Baltic countries, and recorded the news on the answering machine connected to an extra phone line, which existed specifically for this purpose. People could call at any time, day or night, to hear the newest news. Not sure who came up with the idea, but gotta say it was pretty genius.

In a convenient coincidence, Heather has been exploring Latvia, and in this post she explains the tragic history of and shows the hidden beauty found in Jelgava, which happens to be my dad's hometown.
Posted by Dziesma at 4:00 AM