Christmas at Longwood Gardens, Part I

Longwood Gardens is considered to be one of the most beautiful gardens in the country, and after years of hearing about it, I finally managed to visit - specifically to see the magnificent Christmas displays. Although its location in Kennett Square, Pennsylvania (near Philadelphia and Wilmington) made for a relatively long solo day trip from the Washington area, the time and effort were well worth it. My visit was lengthy and colorful enough that I will have share photos and observations from my adventure over at least two blog posts! With over 1,000 acres, Longwood Gardens offers visitors a great deal to explore no matter what the season, though I'm having a difficult time imaging anything being more spectacular than what I saw! 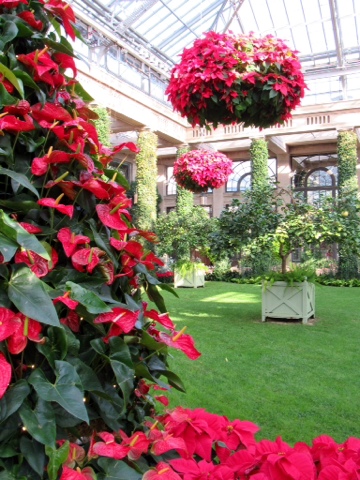 Thanks to its magnificent seasonal flower, Christmas tree and light displays, Longwood is exceedingly popular in December, thus if you plan on visiting then, I recommend reading the tips on their website. For example, weekdays are much less crowded than weekends, and tickets are also less expensive then ($20 vs. $27). I was glad to visit on a Thursday when at times I had certain areas almost to myself, though as dusk fell the gardens did become increasingly more crowded. 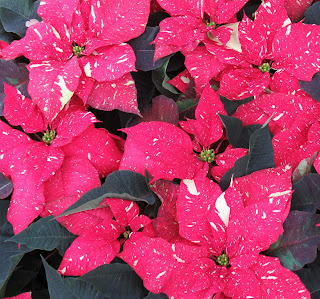 I began my visit during daylight and in the gigantic conservatory. With many different areas and gardens, these greenhouses were impressive in their variety and beauty. In this post I will focus on the Christmas-y aspects. Due to the bright sunny day (and my lack of skill with my relatively new camera!), many of the photos are not as spectacular as the actual sights were. And due my lack of recent free time, I won't write much more, but will share many photos. 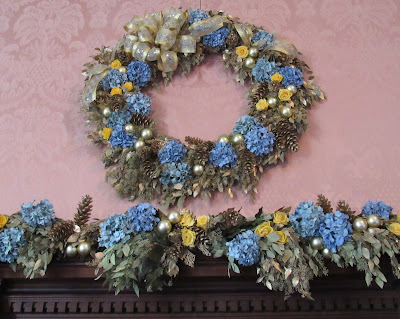 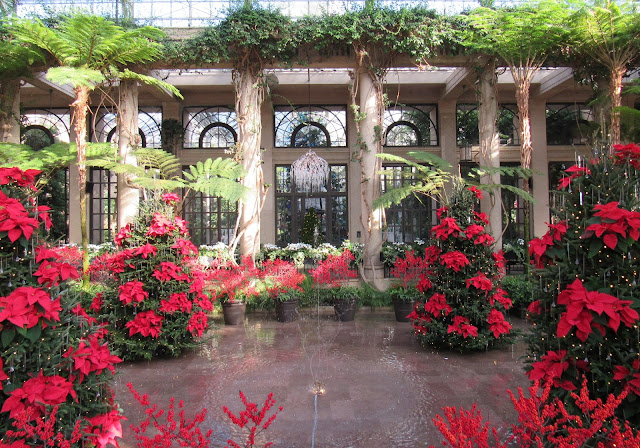 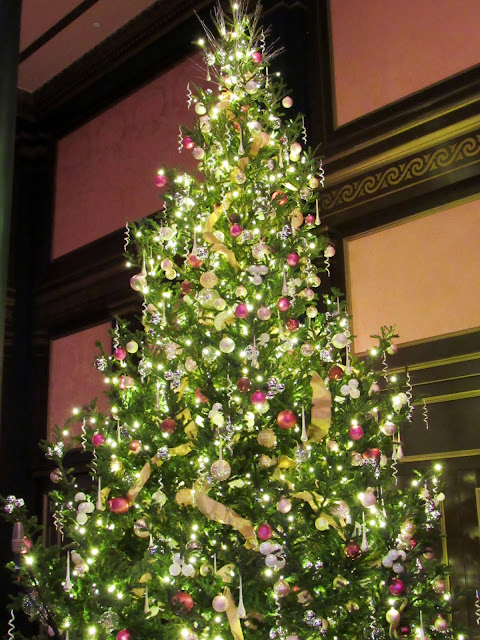 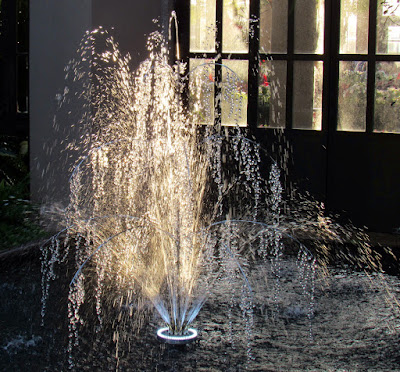 After spending a fair amount of time in the conservatory, I stopped in the cafeteria for lunch (relatively expensive, but also quite tasty) then continued my explorations outdoors.

One Christmas tree was decorated with edible ornaments for the woodland animals, and the decorations replenished by the Longwood gardeners as needed. I particularly loved the beautiful bird bath! 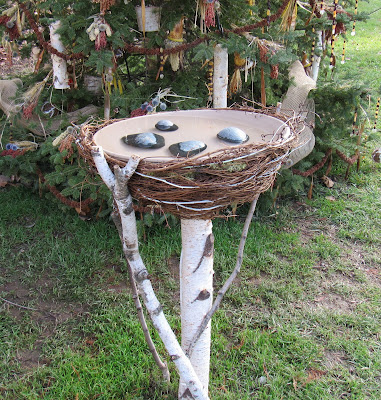 Longwood has three "treehouses," which I absolutely adored. 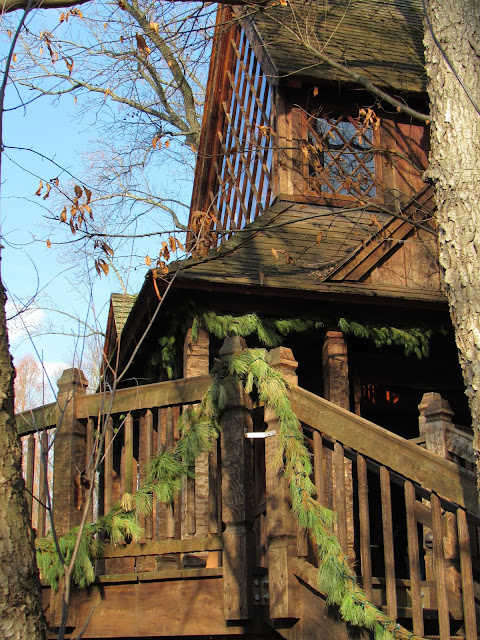 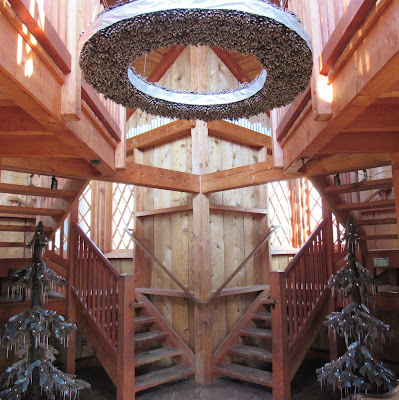 May you and yours have a very merry Christmas! (And stay tuned for part II!)
Posted by Dziesma at 7:38 AM No comments:

Join me on a short photographic journey to see a few Christmas decorations in Washington!

My break between jobs has come to an end, and I will have less time to explore, as well as less time to blog. However, my staycation was absolutely wonderful. So, a bit about what I have been up to:

Spending...time with friends. Lunches, dinners, a fun Hanukkah party -- I always love having the opportunity to spend quality time with people who are near an dear to me.

Watching...During AFI's European Union Film Showcase I saw two films: "Summer of Sangaile" from Lithuania, which did a good job of showing how difficult being a teenager is, though it was so very European that it was challenging to truly enjoy, and "A Royal Night Out" from Great Britain. This one was somewhat fluffy, but certainly enjoyable, particularly because it was based on the true story of then Princess Elizabeth and her sister Princess Margaret leaving Buckingham Palace on VE Day to celebrate the occasion out in the crowded streets of London.

Cleaning...I did some major cleaning and even a bit of purging at home.

Exploring...I have made a concerted effort to visit museums that I had not been to in the past. In addition to two museums, I also visited a botanical garden and took a special tour in a government agency. For more details, you will need to keep reading over the next several weeks!

Surviving winter...Due to the holidays, what with the preparations and parties, December is certainly easier to survive than January and February, when I will need to consult my Winter Wish & Plan List. However, I have already used my great Latvian cookie cutters. 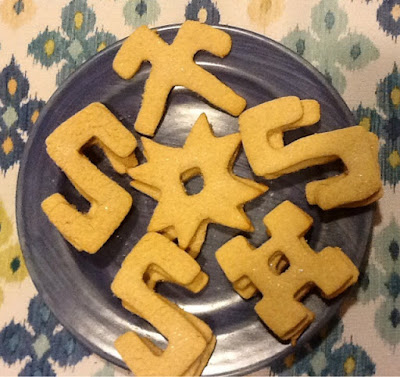 One of the captivating things about the Wonder exhibit was its diversity. Strolling from one room to another, I was continually surprised by the materials used and the end result.


Have you ever considered using shredded tires to create art? I hadn't, yet the artist Chakaia Booker did precisely that. 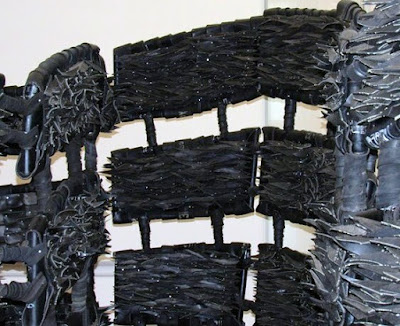 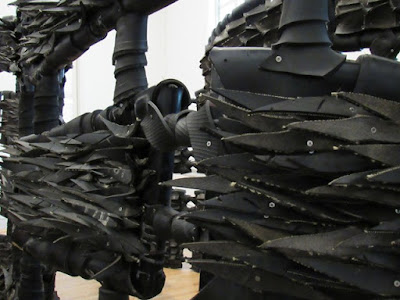 Another fascinating material used - this by Jennifer Angus - and for an incredibly impressive effect: insects! 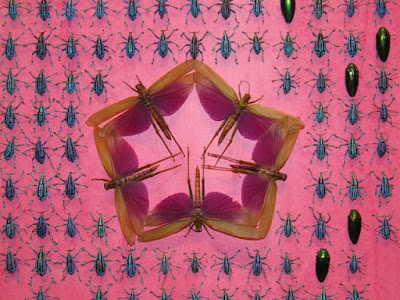 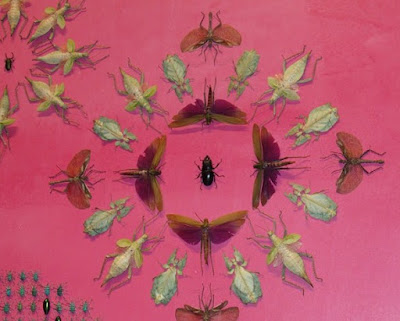 A simpler material - small wood pieces - was utilized by John Grade to create this enormous tree trunk, which was suspended from the ceiling. 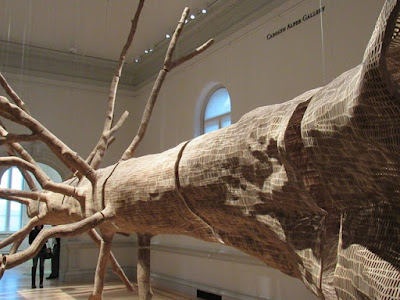 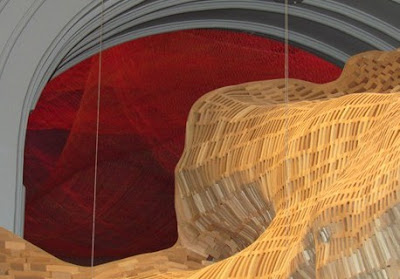 The artist Maya Lin, best known for her very early career design of the Vietnam Veterans' Memorial located on the National Mall in Washington, used glass marbles to create the Chesapeake Bay in her piece "Folding the Chesapeake." 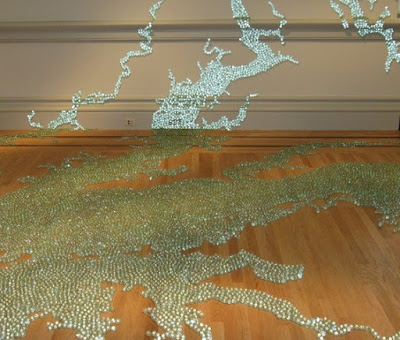 The largest gallery holds yet another artwork which mimics nature, yet this in a truly surprising way. Walking into the gallery in which Janet Echelman's "1.8" is suspended from the ceiling, I immediately marveled at the beautiful colors and shape, as well as the fact that a number of gallery visitors were sitting underneath it on the carpet, beanbag chairs, and loveseats. 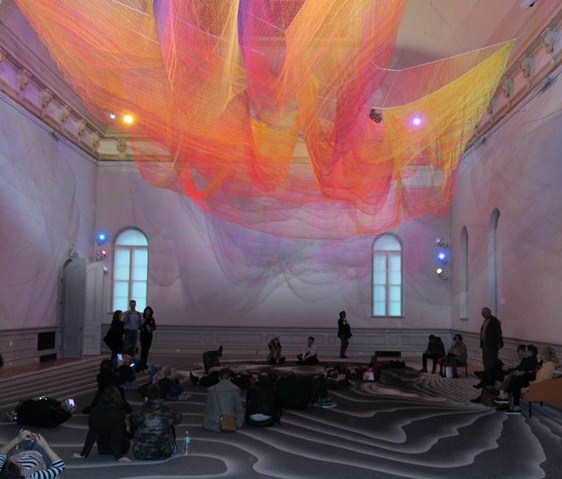 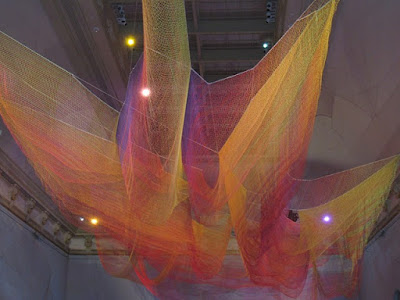 My next surprise came when I read the sign describing this piece. Again, best to leave it up to the experts: Echelman’s woven sculpture corresponds to a map of the energy released across the Pacific Ocean during the Tohoku earthquake and tsunami, one of the most devastating natural disasters in recorded history. The event was so powerful it shifted the earth on its axis and shortened the day, March 11, 2011, by 1.8 millionths of a second, lending this work its title. Waves taller than the 100-foot length of this gallery ravaged the east coast of Japan, reminding us that what is wondrous can equally be dangerous. (Source: here.) 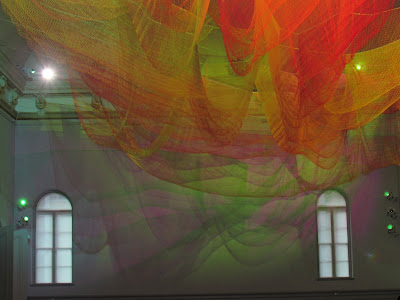 I lingered for a while, but promised myself I would return in the coming months. On YouTube I discovered a great video - seemingly posted by the artist herself - of the piece and how its colors change.


While walking through the galleries on the museum's second floor, I had also noticed a sizable glass artwork suspended from the ceiling. I took a photo, looked on the walls to find identification, but did not spot any. Later I tweeted the photo at the Smithsonian American Art Museum, asking if it was a Chihuly. Imagine my surprise when a short while later the artist's studio responded that it is indeed a piece by famed glass artist Dale Chihuly, and that it's called "Slate Green & Amber Tipped Chandelier", and was donated to the museum by Barbara Lee Diamonstein-Spielvogel. 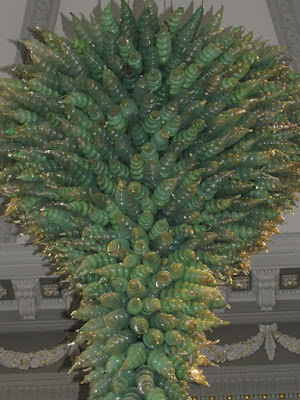 With its prime location across the street from the White House, the Renwick Gallery is easy to find. Being a part of the Smithsonian Institution's American Art Museum means it is also free to visit. For whatever reasons, however, in my 16 years in Washington, I had never visited this small museum. For the past two years it had been closed for extensive renovation, and reopened in November with an exhibit titled "Wonder," which I saw referenced on Twitter numerous times. Thus during my staycation I made it a point to finally make my way the Renwick, and am incredibly glad I did. Since then I have been telling all of my local friends they need to see this exhibit! Words do not adequately express how awe-inspiring and amazing it is.

The Renwick itself has a fascinating history -- it was the first American building built specifically to serve as an art museum.  Designed in 1859 by architect James Renwick Jr., who also designed the Smithsonian’s “Castle” and St. Patrick’s Cathedral in New York City, the museum was initially built to house William Corcoran's private art collection. However, the Civil War - as wars do - disrupted construction, and the building was even used by the Union Army. Finally, in 1874 the building opened to the public as an art gallery, although that did not last particularly long, as from 1899 to 1964 the Renwick was home to the U.S. Court of Claims. In the 1950s Congress even proposed that the building be razed, but in 1962 forward-thinking First Lady Jacqueline Kennedy led a campaign to save the gallery as part of her greater plan to restore Lafayette Square, which is behind the White House. Fortunately in 1965 the Secretary of the Smithsonian S. Dillon Ripley asked President Lyndon B. Johnson that the building be turned over to the Smithsonian Institution. That did occur and the Renwick Gallery was finally returned to its intended purpose as a museum when it opened in 1972 as home of the Smithsonian American Art Museum’s contemporary craft and decorative art program. Now, after a two-year-long renovation, the gallery has re-opened once again. 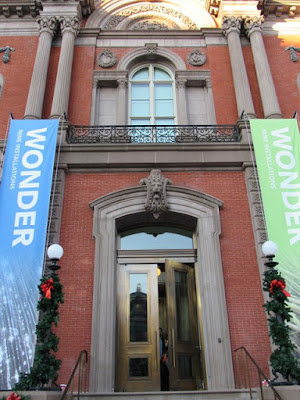 As explained on Renwick's website, "To celebrate, we're transforming the entire museum into an immersive artwork with our debut exhibition, WONDER. Nine leading contemporary artists—Jennifer Angus, Chakaia Booker, Gabriel Dawe, Tara Donovan, Patrick Dougherty, Janet Echelman, John Grade, Maya Lin, and Leo Villareal—are each taking over different galleries in the building, creating site-specific installations inspired by the Renwick. Together, these installations will turn the building into a larger-than-life work of art." To be honest, I had little idea what to expect -- all I knew was that I'd seen a couple of intriguing and beautiful images on Twitter.

If you live in the Washington area, or will be visiting anytime in the next six months, I highly recommend seeing this amazing exhibit yourself -- as I can assure you that you will enjoy it, and that my snapshots do not do it justice! If you are in a hurry, you'll be able to see it in thirty minutes, but an hour is really all you truly need.
The piece that has gained the most recognition - at least on social media - is Gabriel Dawe's "Plexus A1." Using only threads and light he created a magical rainbow. 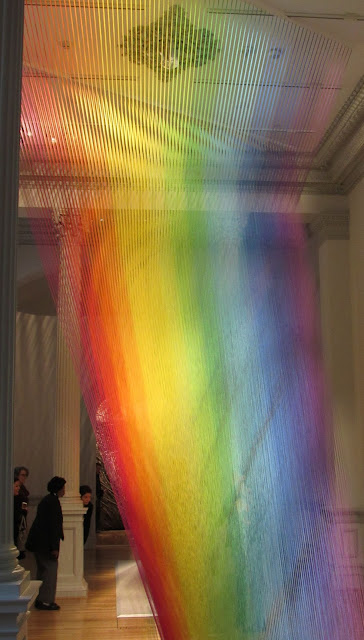 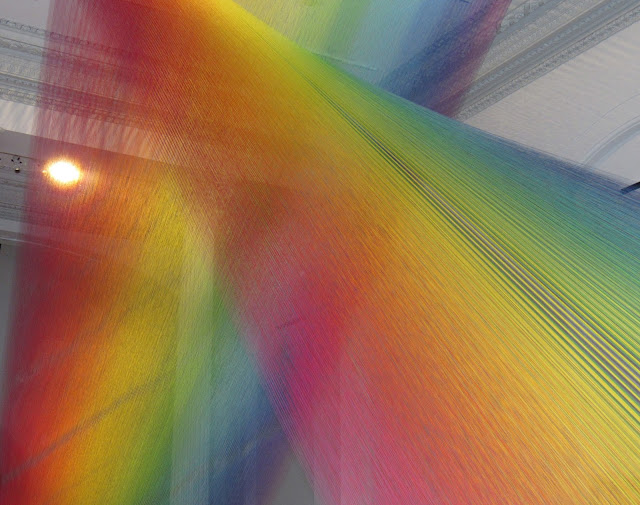 The next piece was all natural... 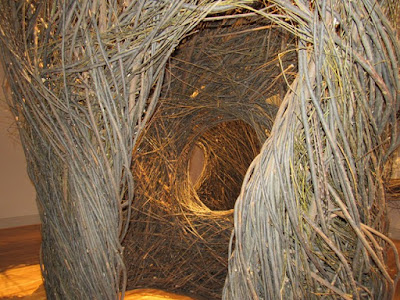 Located above the gallery's stairs, Leo Villareal's "Volume (Renwick)" is best described by the text on Renwick's website: Only part of Villareal’s artwork is visible in the materials suspended above the staircase. This hardware serves primarily as a vehicle for the visual manifestation of code–an artist-written algorithm employing the binary system of 1s and 0s telling each LED when to turn on or off. This simple command creates lighting sequences that will never repeat exactly as before. (Source: here.) 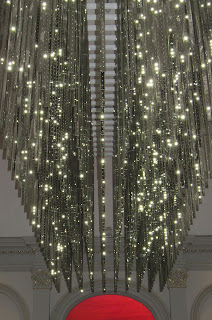