The diversity of ethnics groups and traditions represented in the Washington area is one of the major benefits of living here. Craving Peruvian, Ethiopian, or Korean cuisine for dinner? No problem! Want to be friends with people from diverse backgrounds? No problem!

A Christmas-time tradition for many European groups is the Christmas market. This year was my third time attending the Finnish bazaar, which I described in detail last year. I also swung by the Norwegian bazaar one Saturday; it was smaller than the Finnish one, and photographically not as impressive. The food did smell amazing - I was particularly tempted by the advertised warm rice pudding!

After many years of hoping to make it to the Christmas market organized by the German School of Washington, this year I was finally able to attend, and I must say it might be my new favorite. Because I speak German and have spent considerable time in Germany, those Christmas customs are near and dear to my heart.

I arrived at the market at noon, and while bee-lining for the lunch line was able to hear snippets of German Christmas carols sung by the children's choir -- the same songs my German immersion elementary school choir sang years ago. The lunch options were bratwurst or Leberkäse, plus sauerkraut and potato salad. A perfect-looking German roll came with each meal, but you could also purchase a large Bretzel (pretzel) for only $2. My bratwurst, sauerkraut and potato salad came to $10, and my meal was very filling, though next time I would skip the potato salad - it wasn't that exciting.

After lunch I wandered outside, where I was tickled to find a half-dozen traditional market booths -- the type one sees at outdoor European Christmas markets. 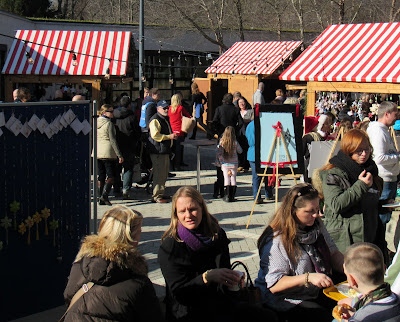 The most popular booth was selling glühwein ($3), while others offered crafts, Lebkuchen (gingerbread) or cinnamon nuts. Additional stands outside were selling crepes (also hugely popular), non-alcoholic drinks, and chocolate-covered fruit. The last one was my personal favorite, as one of my recollections from various markets in Germany were the vendors who sold fruit such as strawberries, pineapple or bananas covered in dark or milk chocolate. This stand was a fundraiser for one of the middle school classes, so the confections were not quite that specific, but the kabob stick with fruit pieces drenched in chocolate I chose was absolutely delectable.

Heading back into the school I swung by the impressive dessert table (which even included a couple of gluten-free options), but I had already used my calorie allotment for mid-day! The school's large multi-purpose room had many tables with various vendors from the Washington area. Additionally, out in the main hallway were two incredibly popular vendors: Binkert's German Meat Products from Baltimore and the Swiss Bakery from Northern Virginia. The sausage scents overpowered the bakery scents, but the variety at both stands was astonishing, and the crowd was snapping up many of the items.

Of course, the Latvian congregation's bazaar is an annual tradition, and is always held on the first Sunday in December. My post about last year's can be found here.

I hope you are enjoying plenty of pre-Christmas festivities in your neck of the woods!
Posted by Dziesma at 7:24 AM