A Few Links for You!

Life has been so busy that I have not had time to write about it! While I manage to scrounge up enough minutes to finish up another blog post, please check out these wonderful things other folks have written.

Our visit to the Udvar-Hazy Center was documented by Liene, with different photos and even more information.

Over in Latvia, Heather has posted a fantastic list of Riga's best cafes, and also found the time to visit Kuldiga - I particularly love the sunrise waterfall photos.

After living on the island of Guam for a couple of years, Antonia now finds herself in Wisconsin - and close to a Trader Joe's! She documented her first shopping trip. I still need to recommend some of my favorite products to her.

On LatviansOnline Arnis explains that great Latvian commercial with the folksingers and what "e-services" the country offers.

I have been looking for old photographs for a certain project, and came across this gem - of me sweeping the balcony of our "summer home" (aka trailer) at Garezers. 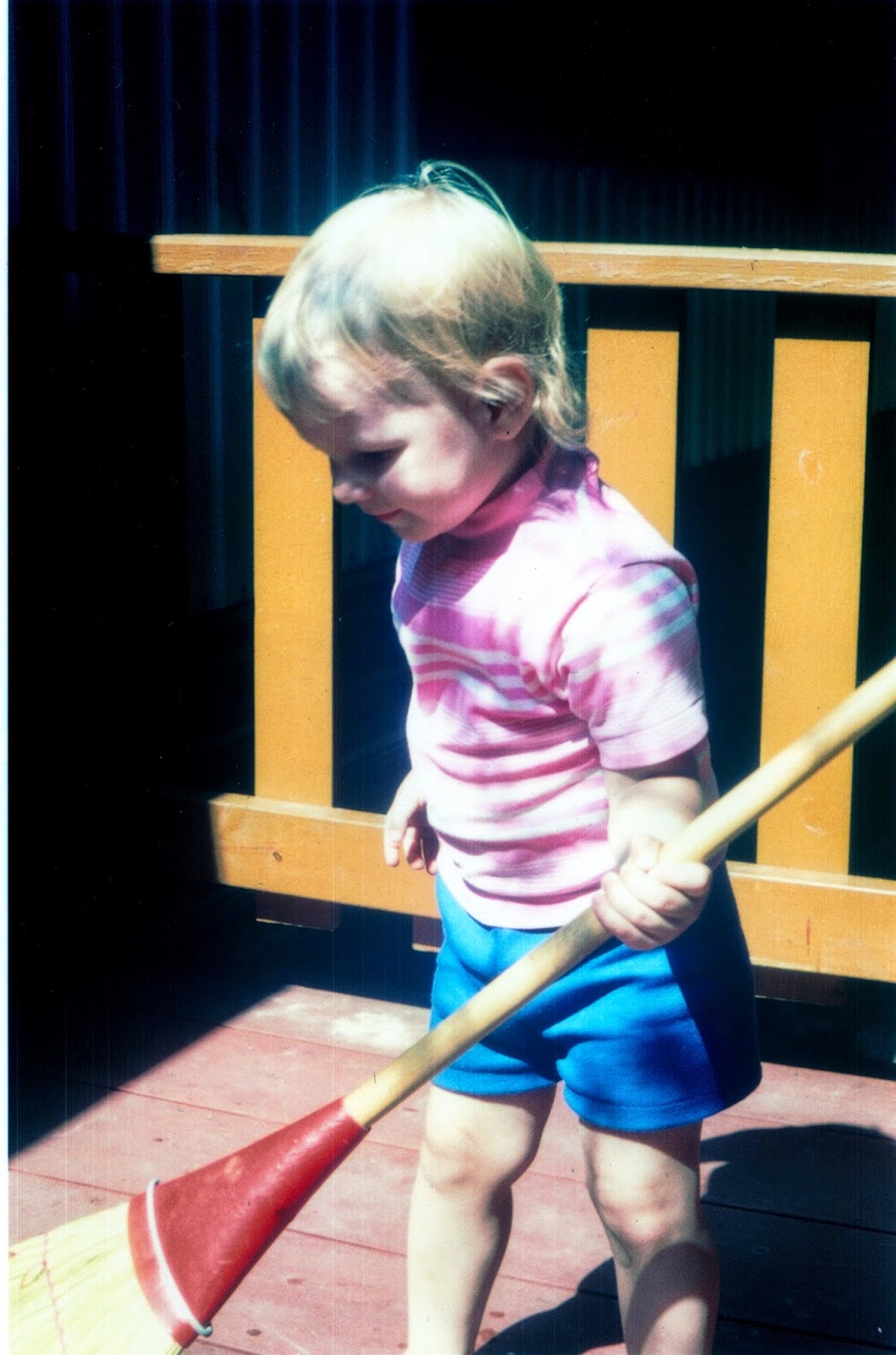 Some dear Latvian friends were in the DC area on a recent weekend. While Roberts had "Latvian business" to take care of, Liene invited me to play tour guide to her and their three children. Given that the kids are quite young and the forecast called for rain, I chose the Udvar-Hazy Center in Chantilly, Virginia as our destination. The Center, opened in 2003, is a part of the Smithsonian National Air & Space Museum, and - in my opinion - is more impressive than the museum on the Mall with which most people are familiar. The Udvar-Hazy Center is an enormous building comprised of two hangars which contain an incredible amount of flight-related artifacts, most notably many airplanes, including a Concorde, and the space shuttle Discovery.
It so happened that the Saturday on which we visited was Family Day, and a variety of tables throughout the center offered activities and information geared towards young visitors. Our visit lasted longer than I had anticipated because the oldest two children had enough to keep them interested for quite a while. Given the weather and time of year, the Center was full of people, but the size of the building makes it seem less crowded than many of the popular museums on the Mall. That being said, as the afternoon progressed at times it did become more difficult to navigate with a baby stroller and keep an eye on the older two boys, although they behaved very well!

Other than its location far from the city and the toll road which leads one there, two other slight drawbacks to the Center are paid parking and the on-site restaurant. As at all Smithsonian museums, entrance to the Center is free of charge, but there is a $15 fee for parking in the large lot adjacent to the museum, which - honestly - does not bother me because few other museums in the world are free, and typically one's car contains more than just one person. The only dining option at the Udvar-Hazy Center is a McDonald's, which - other than being horrible fast food - becomes very crowded on weekends. However, due to its wealth of exhibits, the Udvar-Hazy Center is certainly worth a visit! I do think the visitors enjoyed it, as did I, particularly seeing that this was only my second visit.
Because I managed to forget my camera at home, liels paldies to Liene for the photographs!


On another Saturday, after sitting behind a Tibetan monk (in his long saffron robe and interestingly wearing a fluorescent orange knit hat on his head) on the Metro and running into a Latvian friend and his mother in the theater's lobby, I met friends at the National Theatre for a performance of Noel Coward's "Blithe Spirit." The star, playing the medium and clairvoyant Madame Arcati, was Angela Lansbury. She originally starred in the role on Broadway in 2009, and won a Tony for it. Seeing her perform, one would never guess that Lansbury is 89 years old! The entire cast was wonderful, and the play itself entertaining and amusing.
Afterwards my friends and I ate dinner and drank tea (bubble tea for me, thanks!) at Teasim, which is a DC institution, with three locations in the city, and one in Alexandria, Virginia. If you are playing tourist in Washington, I highly recommend it: the Penn Quarter restaurant on 8th Street NW is conveniently close to the Mall, while the Lafayette Park locations is practically next to the White House. Not only does the restaurant serve all manners of tea, but it has a full menu and their Salty Oat Cookies are legendary.
Posted by Dziesma at 6:06 AM 2 comments:

Snow melt and Sunset on the Potomac

Although instituting daylight saving time can throw me off for an entire week, I do enjoy having more sunlight in the evenings. One recent day after work and dinner, I convinced a friend that we needed to drive to the Great Falls area on the Potomac river, which on the Maryland side is accessed from the wonderful C & O Canal National Park. I was quite sure that with the snow melting the river would be high, and the falls impressive. Given clouds in the sky, the sunset might be nice to watch, as well. Luckily, I was right, and the visit was memorable.

In some spots the ice on the canal had not yet melted, and the towpath was quite muddy. 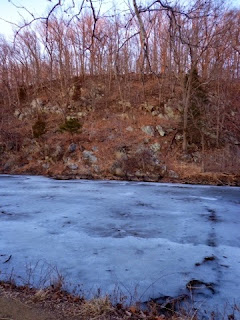 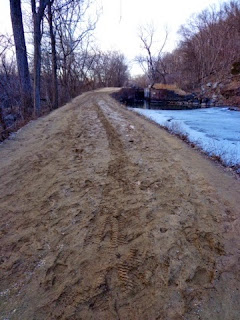 This was the view on one side of the first bridge... 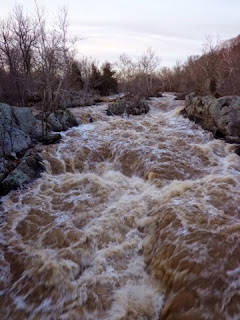 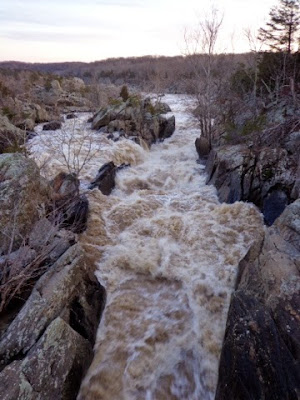 In some spots, small piles of snow still remained. 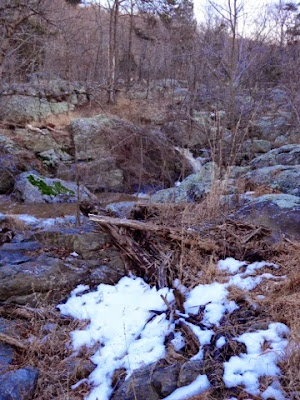 Crossing the next bridge, one side... 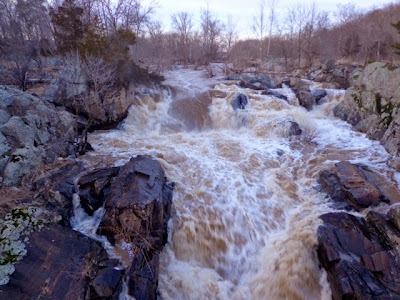 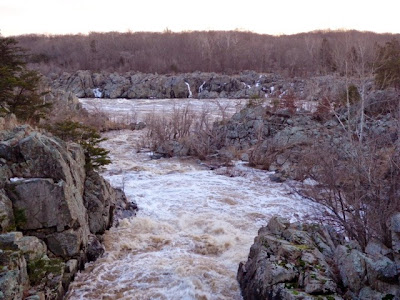 I liked this mini pond (or is it just a large puddle?) and the trees' reflections in it. 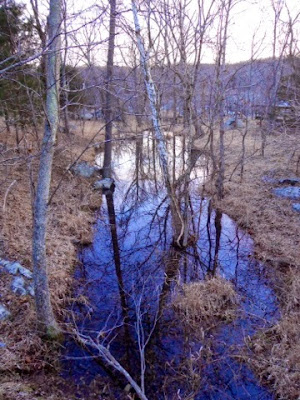 And this is how the main part of the river looked when were arrived. Typically far more rocks are visible in the river. 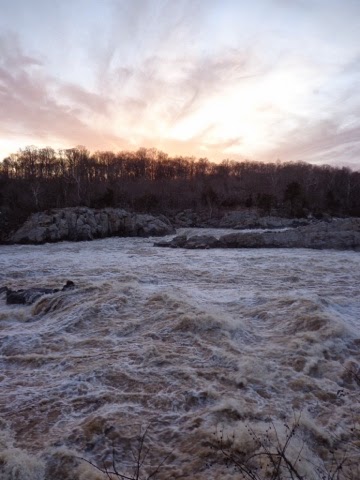 As is the case with sunsets, the colors and the cloud formations kept changing. 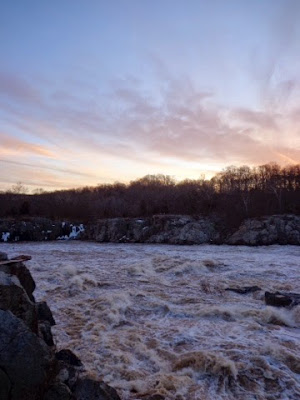 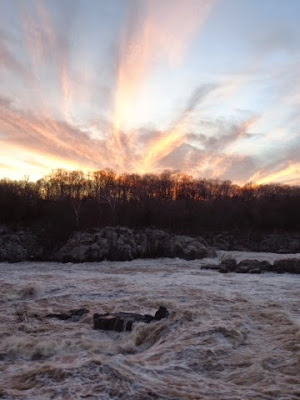 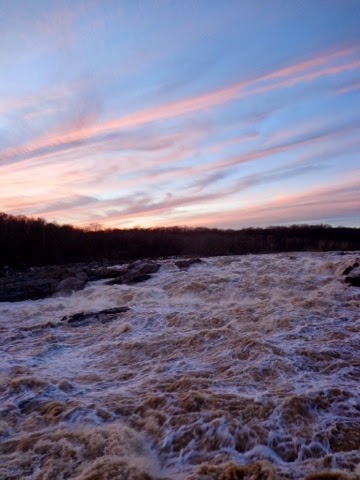 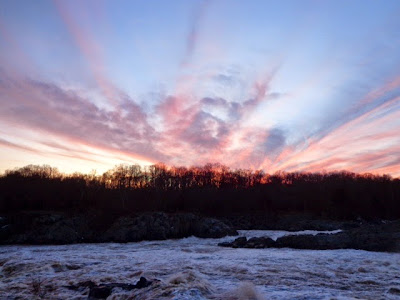 Posted by Dziesma at 2:00 AM No comments:

Does it sometimes seem that living life interferes with enjoying life? The daily requirements of work, errands, and chores often overshadow the memorable and truly enjoyable moments, particularly in the long dark winter months. Now that daylight saving time has begun, and the spring thaw has finally arrived in  Washington, I am greatly looking forward to the coming months and various events, trips, and happenings planned for this season of renewal.
A grand European trip (such as my trip to Latvia and Lithuania in May 2014, or my journey to Belgium and the Netherlands in March 2012) is not something I can afford every year, so this year I am making a concerted effort to attend more cultural events. In addition to the play "The Widow Lincoln", which I saw recently, next week I will see another play - this one with a big name actress. Next month I will travel out of town to attend a concert, and also welcome friends and family visiting DC. May means European Union Open House Day (scheduled for Saturday the 9th), and also the Eurovision Song Contest viewing party, plus hopefully a trip or two.

In the Eurovision Song Contest, Latvia will be represented by a woman with the unlikely name of Aminata Savadogo, whose background is representative of the international and multi-cultural times in which we live: her mother is of Latvian and Russian descent, and her father is from Burkina Faso. In case the video below does not appear on your screen, this is the link.

On a more traditional note, this commercial is currently airing on Latvian television. The three women are from a folk music ensemble called Suitu Sievas, and they are trying to convince - via folk song - the slightly surprised man that he can take care of many tasks online instead of waiting in line at various state agencies.

Hope you have fun plans for the spring!
Posted by Dziesma at 9:00 PM No comments:

America's national parks are sometimes called "America's best idea," and the very first national park, Yellowstone, celebrated its 143rd birthday of March 1. Yellowstone is an iconic American vacation spot that every U.S. resident should visit at least once! Best known for the Old Faithful geyser, the park encompasses over 3,400 square miles, of which about 80% is forest, 15% is grassland, and 5% is water. There are close to 300 waterfalls of fifteen feet or higher that flow year-round! Wildlife is also abundant, with elk and bison seen daily by most visitors. With enough to see and do for several days, it is an ideal travel destination.

One of my favorite vacations ever included time spent at two national parks - Yellowstone and Grand Teton National Park - as well as Craters of the Moon National Monument, which is located in Idaho. In honor of Yellowstone's birthday, I am happy to share share some of the 900+ photographs my friend and I took in the park during our intense four-day visit in late August 2013. What most surprised me was the diversity we saw as we criss-crossed the area, and I would love to return to explore even more.

As we drove into Yellowstone, the very first thing we saw was a waterfall. To be more precise, we noticed many cars parked along the side of the road, and realized there must be something worth seeing nearby. We pulled into an open spot on the roadside, followed others, and quickly caught glimpse Lewis Fall, the first of several lovely waterfalls we would see.
Yellowstone is home to many fascinating and unusual geothermal features such as the well-known geyser basins, and lesser known spots such as mud pots, thermal springs, and thermal pools. 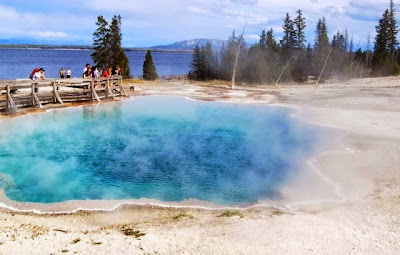 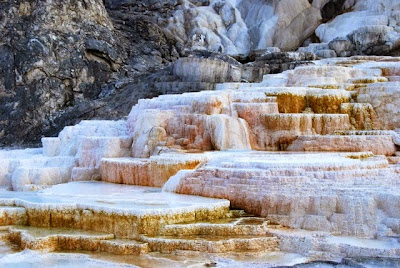 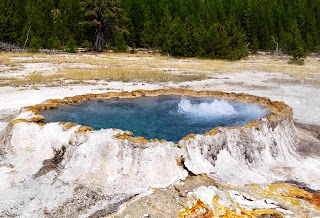 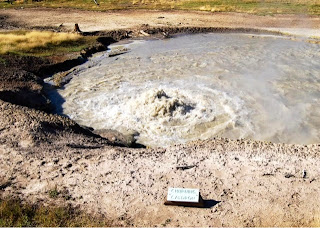 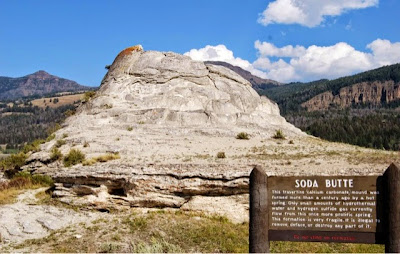 The park also features stunning vistas, and is generally an amazing place to spend several days. 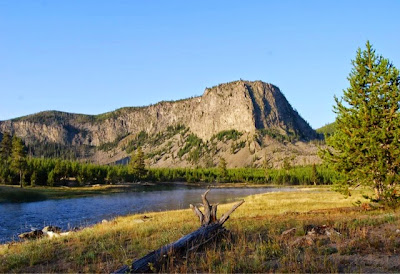 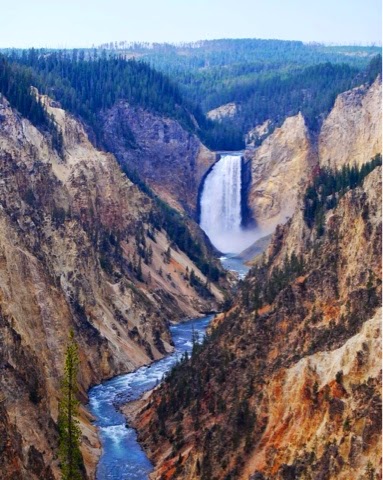 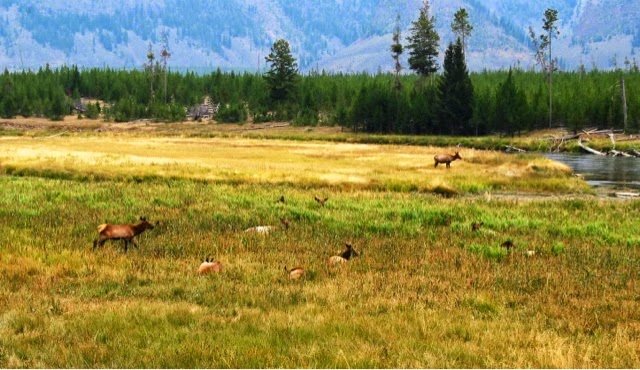 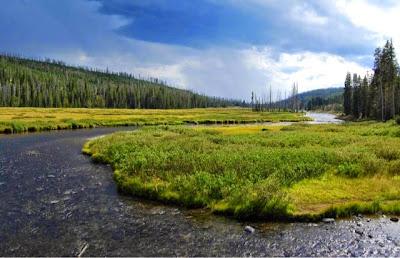 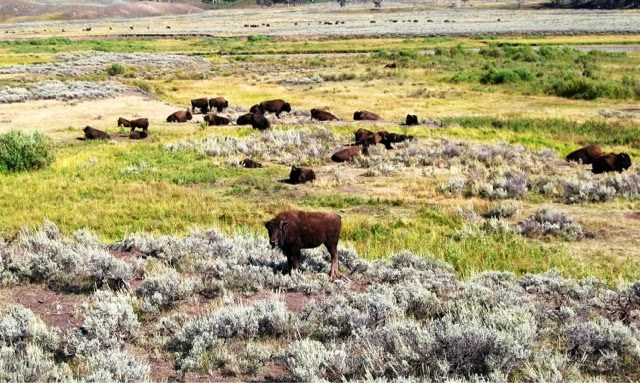 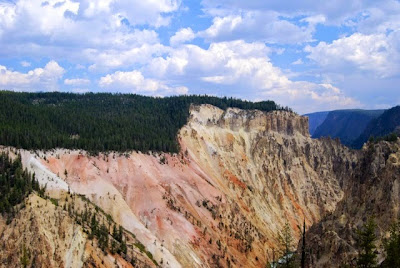 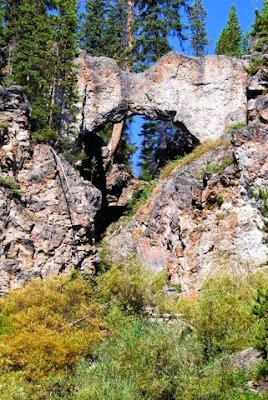 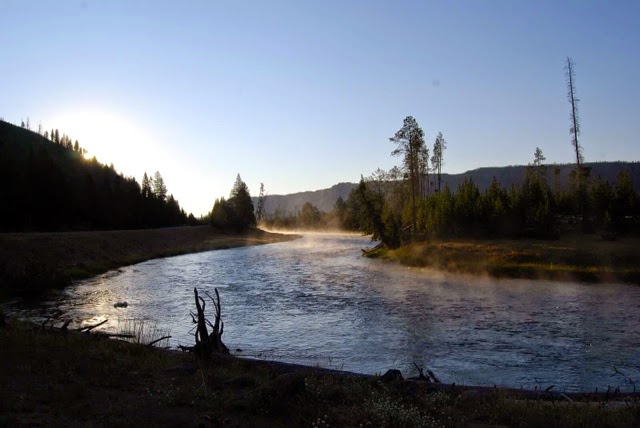 There are dozens of fantastic places for a hike... 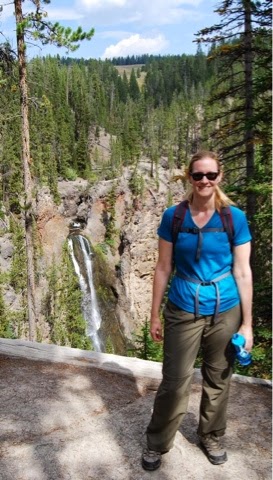 ...and plenty of spots in which to cool off on a warm end-of-summer day... 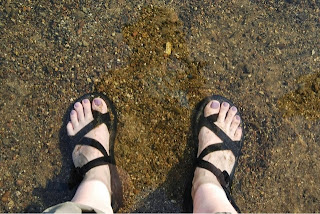