Vacationing in the U.P.

As a child growing up in urban southern Wisconsin, I often wondered about the enormous peninsula which was strangely attached to the northeastern part of the state, yet belonged to Michigan. My summers were spent in far southern Michigan, which I always enjoyed, but all of northern Michigan and its Upper Peninsula remained a mystery to me for many years. Finally as an adult I journeyed to the northwestern part of the state, visiting well-known vacation destinations such as Sleeping Bear Dunes National Lakeshore, Traverse City, Leelanau and Old Mission Peninsulas. And I was smitten. However, given the plethora of places around the world I'm interested in visiting, going further north just had not happened. Then this winter I decided I finally needed to make concrete plans see at least part of the Upper Peninsula.

Fortunately, Jennifer, a friend who lives in the Lower Peninsula, had also not visited the UP and was keen on joining me. We spent some time in February mapping out our trip for five days around Memorial Day weekend -- we would leave Grand Rapids on Friday morning, spend two nights in Munising with the goals of visiting Tahquamenon Falls State Park and Pictured Rocks National Seashore, then spend another two nights in the town of St. Ignace with the goal of spending a day on Mackinac Island (which we had both visited before: she about 20 years ago, and I at age three - not surprising I don't remember that!), and drive back to Grand Rapids on Tuesday. Word to the wise: if planning a trip to these areas, advanced planning is certainly recommended, as we were able to reserve hotel rooms are quite reasonable rates, while anyone trying to do so closer to a trip around a long weekend would have found sold-out hotels and much higher prices for lodging.

After much anticipation our trip finally arrived, and we steered northward. Soon we were surrounded by forests or occasionally fields, both of which we would appreciate throughout our trip, particularly given that it was late spring and the many different shades of green were breathtaking. Our last stop in the Lower Peninsula was a roadside rest area, which also featured a scenic overlook -- we had lucked out with wonderful driving weather. 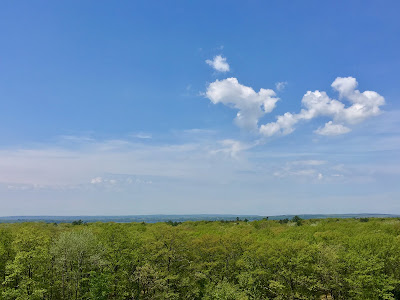 We crossed the famous Mackinac Bridge. Otherwise known as the Mighty Mac, it is the fifth longest suspension bridge in the world. The toll was a mere $4, and a number of minutes later we were - at long last - on the Upper Peninsula. 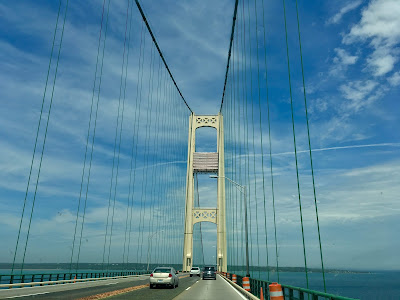 Our first stop involved lunch at a fish market and restaurant recommended by a friend -- what a perfect way to kick off the trip! King's has two locations; we stopped at the store in Moran, where we enjoyed what would be the first of many whitefish meals. Jennifer loved her whitefish basket, which contained three relatively large pieces of very lightly breaded whitefish, a generous mound of french fries, and a cup of zesty coleslaw -- which she declared to be some of the best she's ever had. I constructed my own basket with the same fries and coleslaw, as well as whitefish dip, which I scooped up with the lentil crackers purchased back on the Lower Peninsula. A word of caution to anyone who must adhere to (or attempts to) any special diet such as gluten-free, dairy-free, or - god forbid! - vegetarian or vegan: you will have a difficult time dining in restaurants on the U.P. This is the land of fish, meat, and potatoes. I ate more french fries in four days than I had in the previous four months! Vegetables and fruit were few and far between on any restaurant menus. 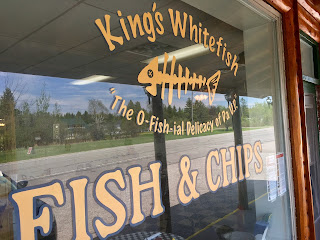 Our next destination was the famous Tahquamenon Falls, which is well known for its color and the size of the Upper Falls. Due to it being in a state park, visitor fees are assessed -- we paid $9 for the day due to having out-of-state license plates on our rental car. We first visited the Upper Falls, which are truly impressive given the size -- one of the largest waterfalls east of the Mississippi. The walk to the viewing area is quite short, though the descending to the viewing platform does require about 90 steps, but this platform allows for some fantastic close-up views of the falls (lower photo). However, lovely views can be had even from a couple of areas off the walkway, which doesn't require any stair climbing. The falls' brown color is visible even from far away, and is due to tannins. 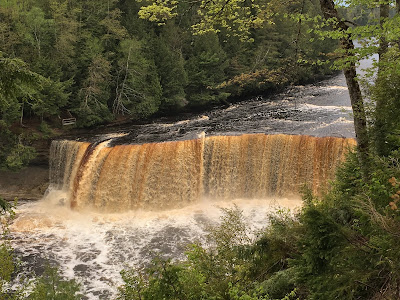 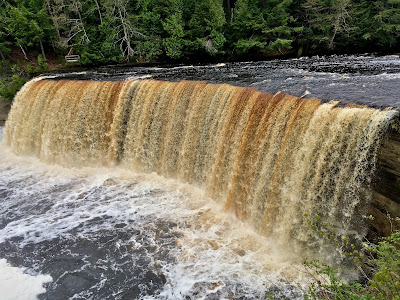 The weather had turned overcast and gray, and toward the end of our Upper Falls visit it began raining, so we hurried back to the car to drive over to the Lower Falls, which consist of several much smaller falls and rapids. The Lower Falls are less impressive, but the area is beautiful and well worth a visit, particularly given the boardwalk which takes you through the woods, and which during our visit was surrounded by lush green colors and several different wildflowers. The park encompasses 46,000 acres, has numerous camp sites, hiking trails, etc, but our trip needed to continue, so we hit the road just as the rain began falling more heavily.