The Latvian Center Garezers celebrated its 50th anniversary in grand fashion over the July 4th weekend. The celebration's slogan was "Kas ir Garezers? Es esmu Garezers," which I decided to use as the title although my post is in English. "What is Garezers? I am Garezers" perfectly sums up this place which has been so important to many North American Latvians. Thousands of people have played a role Garezers' history, and many of us have filled various roles. Garezers would not exist if not for the founders and their vision and perseverance, the countless volunteers who do everything from build buildings to stack chairs to paint walls to shelve books, the children and teenagers who attend the programs, the parents who drive them there and foot most or all of the bill, the summer employees who work tirelessly with little pay, the full-time employees who work tirelessly through the year, the visitors who attend events or spend weekends or vacation time in a Garezers cabin or tent, the shareholders who own Garezers, and the many donors who support it. 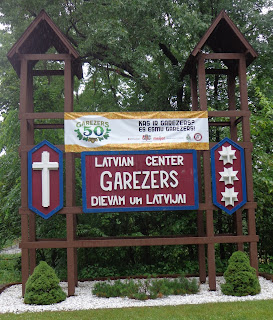 Given how important Garezers has been in my life, I had every intention of attending the celebration; it had been on my calendar for two years, and although July is a difficult time for me to take time off from work, I'd made plans to make sure I would be there. As I kept hearing about more and more friends planning on participating, and as I pitched in with some volunteer work in the weeks leading up to the big event, I felt like a little kid waiting for Christmas!

Due to schedules and other considerations, I drove to Michigan instead of flying. The drive between DC and Three Rivers, Michigan is not an exciting one, and at best can be done in under ten hours. I left home at 7.10am,  and was pleased that traffic moved smoothly during the entire trip. Amusingly, my sole "delay" was when I ran into friends at an Ohio service plaza. They, too, were on their way from the DC area to Garezers! When I mentioned this to an American friend who also travels frequently, he observed, "You run into all sorts of people. I don't think I've ever run into someone I know while traveling." Well, this is what happens when one is Latvian and one knows people everywhere! The rest of my roadtrip was uneventful. With only a few quick stops on the way, I happily drove into Garezers at 4.45pm.

My sister, brother-in-law, little nephew and niece, mom, and I all rented a private summer home in the nearby "Ciems Latvija" neighborhood. I arrived to find my eldest niece and her husband setting up a tent and fancy sun shade in the backyard, and after everyone had settled in, they provided us with a delicious dinner of grilled meats and various side dishes (fresh meat purchased from Food Dance, and sides from Water Street Coffee, both in Kalamazoo). The weather was absolutely perfect, and we relished sitting outside, enjoying the late-setting sun, crisp Michigan countryside air, chirping birds, and even fresh blueberries from the backyard bushes.
The weekend's first event--a beach party sponsored by the American Latvian Youth Association-- took place that evening, however, I was too tired from my long drive, and too relaxed after dinner and playtime with kids to seriously contemplate going. Unfortunately, that meant I missed a performance of the group "All Folked Up," which by all accounts was great.

Friday morning my eldest niece, a friend, and I volunteered at the event's registration table, a fun way to help out while welcoming some of the many visitors arriving in Garezers for the weekend.
For some folks Friday was a day of sports - many individuals participated in the First Arnis Skulte Open golf tournament in the morning, while in the afternoon there was a East Coast vs. Midwest soccer match. My day, however, was more culturally oriented.

I spent part of the afternoon visiting Klinklāva Art Gallery to see the special exhibit, which featured an enormous variety of pieces, all of which were for sale. Some were donated, others had been provided by the artists. For your viewing enjoyment, below are a number of photos; I only apologize for not knowing the titles for these works. 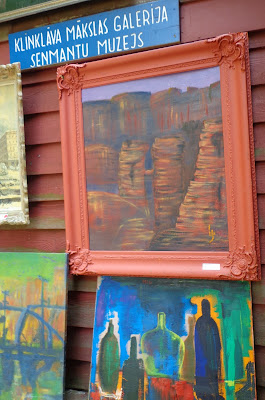 This is but a tiny selection of the many works that were exhibited. For a final bit of art as I finish this post (I will continue description of day 1 in the next post!), I spotted the adorable dancers below on the wall of Zemitāni (one of the GVV dormitories). They remind me of characters from the Richard Scarry books I loved as a child! 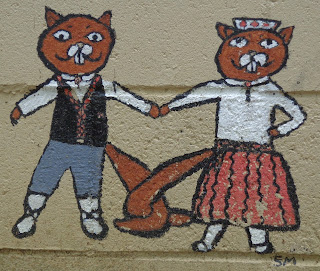