We arrived in Dziesmu leja/Song Valley Saturday evening, marveling at the sheer number of people present - we hadn't seen it that full in years, and we sat higher on the hillside than usual, although I must admit that observing the audience adds a certain entertaining element to watching the show.

The program began somewhat unexpectedly with a woman standing in the middle of the dance floor announcing, "Man ir 50 gadi! - I am fifty years old!" This was followed by a man, clearly a fair amount older, striding out to announce that he is 50 years old. Next came a young girl, who also said that she is fifty years old. Then a group of folk dancers ran out to yell that they are also 50 years old. By this point I think everyone in the audience had understood the touching all-inclusive theme, echoing the celebration's slogan of "Kas ir Garezers? Es esmu Garezers!" - because we are all a part of Garezers, we were all celebrating our 50th birthdays! Appropriately, the evening's concert was titled "Mēs esam Garezers!" ("We are Garezers!").


With an impressive number of performers - both singers and dancers - from several cities and GVV, a varied program of singing interspersed with dancing, and a great thematic idea, the concert was a rousing success. Beginning with a string of dances to represent the atmosphere (Vide).... 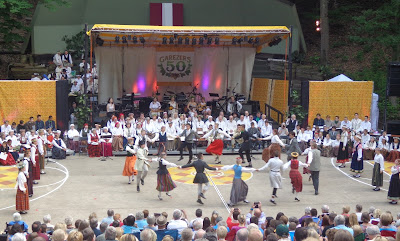 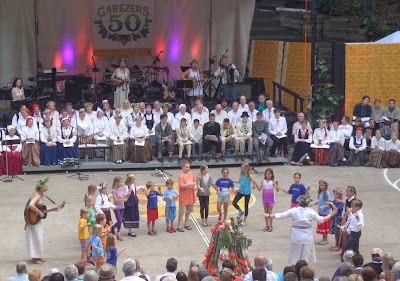 which was naturally followed by a high school segment (Vidusskolas laiki), which featured the dance "Gandrīz tautas deja" (Almost a folk dance), choreographed by GVV graduate Margrieta Langina and set to the famous song "Gandrīz tautas dziesma" by the famous Latvian rock group Pērkons. The only video of this dance I could find is this one, but if you've never seen a folk dance set to rock music, I suggest watching at least an excerpt!


The sections that followed were on returning/giving back (Atdeve), friendship (Draudzība), family (Ģimene), and Permanence (Pastavība). Two dances which earned the most applause and which were most fun to watch were in the friendship section, and fortunately the performances by Toronto's folk dance ensemble Daugaviņa have been posted online: "Nerejati ciema suni", as well as "Laucinieku deja," (the group behind Daugaviņa is Milwaukee's Metieniņš) choreographed by another GVV graduate and former teacher Iveta Asone. It was particularly entertaining to watch some of the men dance, as a couple of them are well over 6ft tall and stocky, yet they were moving as lightly and happily as young children.

Another wonderful moment was the performance of "Ģērbies, saule sudrabota," jointly performed by the choir, the folk ensemble All Folked Up, and by several dance groups. Two of the more beautiful songs included in the program were the moving "Svetī debesis šo zemi" and the beloved "Saule, pērkons, Daugava."
The concert closed with the always popular song "Gaismas pils," and then with the entire audience standing up, everyone - choir, dancers, spectators - holding hands, and singing "Pūt, vējiņi!" I'm quite certain there were a few misty eyes to be found. By this point we all knew - we are Garezers.

Then it was time to party! (Or bedtime for a few folk in our party, so they headed home.) First up: Bob & the Latvians, who have posted a three-minute video featuring snippets from both their Garezers-Palooza and Saturday evening performances. They were followed Latvian superstars Pērkons. Photographer Brita Brookes took some amazing photos of their performance. I was busy visiting with friends at the top of the hill -- we were so happy to catch up and observe the scene from afar that we didn't seriously contemplate going down to the stage and dance floor.
Happy on the hilltop - until one friend who'd ventured into the valley returned and excitedly exclaimed: "The view down there is so different! The music's great, and so is the energy. I say we go down and party like it's the 90s. Who's with me?!?" This was expressed with such enthusiasm that we couldn't say no. And she was right! Pērkons puts on an amazing show! Interestingly, while I don't count myself among the biggest of their fans, Pērkons' music has apparently been so ubiquitous in my life that I was singing along to many of their songs.
While they played a total of three sets, regrettably sis and I did not have the energy to stay that late. We were walking out of Dziesmu leja as they began playing their best-known song, Gandrīz tautas dziesma, so I sang and hummed along while we strolled back to the house, ingenious (thanks, Ks & N!) headlamps lighting our way on the dark country roads, which were otherwise only illuminated by many fireflies flitting about in the magical summer night.