This year Latvia celebrated 97 years since it declared independence on November 18, 1918. The Washington area Latvian community marked the day on November 15th.
The day began with a flag-raising outside the church, then most proceeded to the church service, while the Latvian school gathered for a small event of their own. The students were fortunate in that we had special guests - musician Laima Jansone and singer Zane Perkone, who later performed for the entire community, but in their time with the school, they engagingly educated us about the kokle.The type Laima plays is from Latgale, while the kokles we are more accustomed to seeing here in the U.S. are from the Kurzeme region. 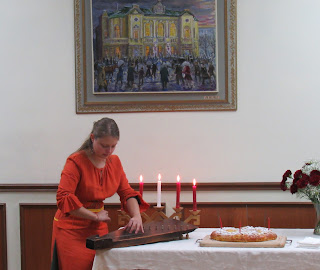 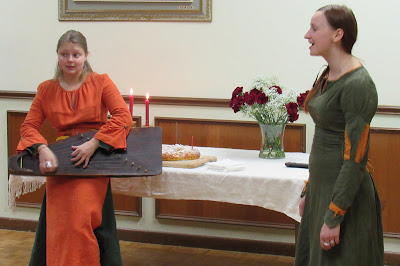 Later the concert itself was absolutely fantastic. Afterward I did have a brief chance to chat with the performers; Laima was very interested to learn that my grandfather had made kokles here in the U.S. 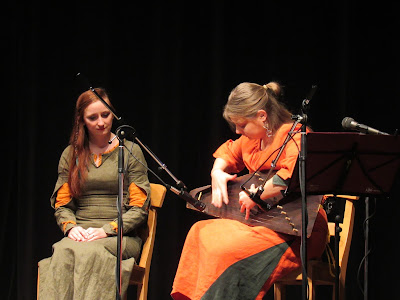 As is always the case, following the concert everyone greatly enjoyed the reception - complete with champagne and many delicious hors d'ouevres. And as is often the case, I was one of the last to leave. It's always nice to see friends and acquaintances, and have an opportunity to catch up.
Although from my photos it may seem that only women were present at this event, I can assure you there were quite a few men, as well. But clearly they were not as photogenic!
Posted by Dziesma at 1:00 AM