Yesterday the DC area had yet another ice and snow storm to deal with, and it was dangerous enough that federal government offices were closed. I tried to be productive, doing things such as shredding old documents and organizing files, but also managed to bake some muffins and catch up with my sisters.

I do not know the author of this clever photograph, but I just had to share, as I know that many people in the Midwest and on the East Coast as just as tired of this long, drawn out winter with its seemingly never-ending snow and bitter cold. 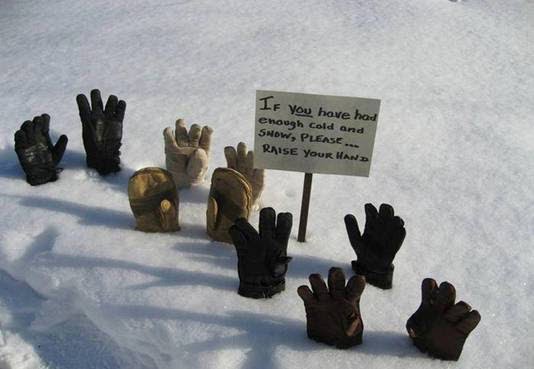 Luckily the snow did not interfere with my big weekend plans on Saturday, which involved co-hosting a baby shower for a good friend of mine. Good food was had, gifts were opened, no cheesy shower games were played, and the guest of honor felt showered with love and friendship - as it should be.

An important DC announcement was made this morning: the National Park Service announced when the city's famous cherry trees should blossom. Due to the cold and long winter, the peak bloom (when 70% of the blossoms are open) is expected to be a tad later than usual, sometime between April 8 and 12. I moved to the DC area fifteen years ago, right at cherry blossom time. My mom and I drove here from the Midwest, my car packed full of belongings. My brother and his family graciously allowed me to live with them in the far-out suburbs until I found my own place. After spending that first night at their home, the following day mom and I took the Metro into downtown DC and walked around the gorgeously blooming trees at the base of the Washington Monument. Then mom headed to Union Station to take a train home, and I headed to a job fair. Fifteen years later I am still enjoying all that the DC area has to offer!
Posted by Dziesma at 4:05 PM