There are few things better in life than three-day weekends! My Labor Day weekend included attending a baby shower and a fun end-of-summer party, which was luckily held indoors, seeing as the day was mostly uncomfortably hot and humid, with occasional torrential downpours.

On Labor Day itself, which was also ridiculously hot and sticky, my travel buddy Bryan and I took a little road trip out toward Western Maryland. First we visited Antietam National Battlefield, which is where the Civil War's bloodiest battle took place. Our initial stop was the visitor center, where I was pleasantly surprised by the colorful flowers both in the flower beds out front and in pretty arrangements in the ladies' restroom. They added much needed color to a somber and history-heavy place. 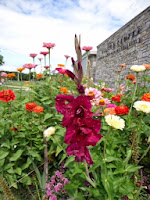 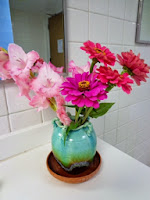 The exhibits in the visitors center were quite interesting and informative, and the bookstore sold all of the typical books, postcards, etc., but also hats. The hats worn by the troops didn't do much for me, but a top hat similar to one worn by President Lincoln suited me quite well. 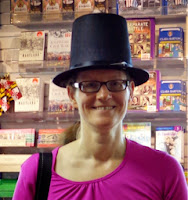 Visiting Antietam entailed a driving tour with about ten stops, many of which - honestly - are not that interesting, unless you are a true Civil War buff. So, we skipped some of the stops, but did made sure to check out the more interesting ones. 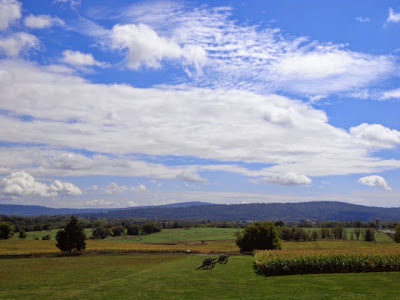 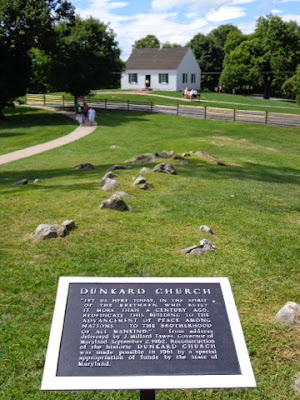 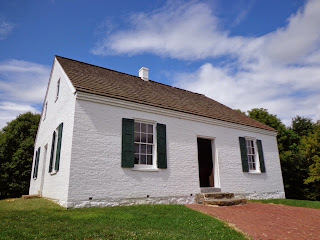 After Antietam, we paid a visit to the little town of Boonsboro, which nowadays is best known due its association with romance novelist Nora Roberts, who also write mysteries as J.D. Robb. She lives nearby, and owns a bookstore called Turn the Page, along with several other businesses. 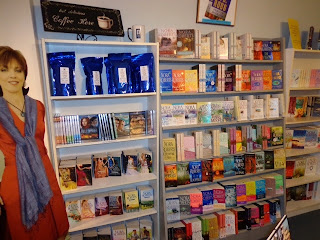 Her impact on the town was highlighted in this article in the Washington Post. After lunch at Kristi's Cafe, we stopped at the bookstore, which is heavy on the Roberts and Robb titles. One entire room of the shop is full of her books; as you can see, she is a prolific author.

Before leaving town and trying to avoid the area's single rain cloud, I couldn't resist taking a photo of another store's sign.
Soon the sun was shining once again, and next we stopped at Gathland State Park, which back in the late 1800s had been the home of Civil War journalist George Alfred Townsend. He had constructed a number of building on the property, but only a couple remain. One is the vault in which he'd hoped to be buried, although that did not happen. One of the two remaining buildings features an exhibit about Townsend and his life, while the other has exhibits on what it was like to be a Civil War journalist. Also located in the park is the War Correspondents Memorial Arch, dedicated in 1896. Townsend solicited donations from the likes of J.P. Morgan, and had the arch built to honor Civil War correspondents.
The Appalachian Trail runs through the park, so we took a mini-hike on that. From there we drove to the town of Brunswick, as I had heard about a unique cafe,  Beans in the Belfry, located in an old church. If you are ever in the area, this establishment is well worth a stop! Most everything on the menu - from coffee drinks to iced tea to ice cream sundaes - sounded delicious. Of the items we sampled, I was very happy with my gazpacho (available for a limited time due to a special Frederick County "farm-to-fork" special menu) and my tropical iced tea. Bryan's frozen lemonade was too tart, but he praised the carrot cake. With its many tables and different seating areas, Beans in the Belfry is an ideal spot for a lazy afternoon with a book and latte; if I lived in the area, I would certainly be a regular customer! 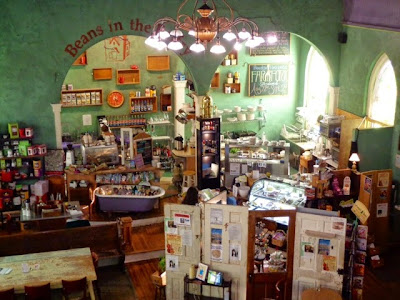 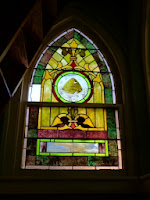 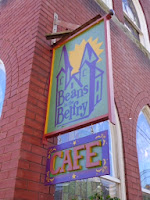