Amazingly, another gorgeous weather weekend was coming up (we had a generally fantastic summer and thus far wonderful autumn this year, with many sunny, dry and warm days -- I hope as a reward for living through a terrible winter, not as a precursor to another freezing cold season). Doing something at least somewhat outdoorsy was definitely necessary. When a friend invited me to join her on a tour of the National Park Seminary district, I jumped at the chance. Having heard about this historic area, I was intrigued by its history and architecture. Much of the tour took place outdoors, although we were shown a couple of interiors, including the marvelous ballroom.

Located in the Washington suburb of Silver Spring (yet "inside the Beltway"), the land had once been a tobacco plantation. In 1887 the area was repurposed as a resort, and a hotel named Ye Forest Inne was built. On the photo below you can see the original stained glass sign above the hotel's main entrance. However, the hotel was not successful, and the land and building were rented and then purchased by a couple who created a finishing school for young women. Opened in 1894, it was named National Park Seminary. (Apparently for a short while in the U.S. 'seminary' denoted a girls' school, while 'academy' was a boys' school.)

Over several decades the school was owned by three different couples, and expanded with many new buildings constructed in various styles. At its peak popularity, the Seminary educated approximately 400 high school aged women annually, and was attended by girls from well-off families from around the country. During World War II the Army seized the property, and it was turned into a rehab hospital. Later the Army practically abandoned the Seminary, and many buildings fell into disrepair. Eventually the county purchased the property for $1, then selling it to a developer. By that time the Seminary was listed as a historic area. Many building have been beautifully renovated. The original  hotel building now contains apartments, the sorority houses are single family homes, while the additions to the school have been converted to condominiums, some of which are quite spacious and sell for up to $1 million.

Our tour guide was brimming with interesting facts and funny anecdotes about the school, its students and owners. My favorite tale was about the annual Colonial Ball, which was held on George Washington's birthday, February 22. Although the school had regular dances, those for many years did not include any boys - the girls danced with one another. For the Colonial Ball, half of the girls would dress up as Martha Washington (George's wife), while the others dressed up was George himself. Almost as good as having boys at the dance, right? 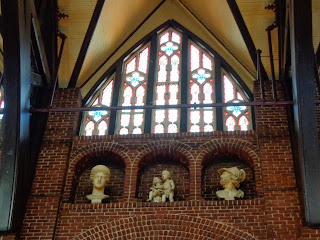 Sororities evolved to be a significant component of the school's existence. Each sorority had its own house, although those were used only for meetings and events, not as residences. (When the Army  owned the property, the sorority house were converted to officers' housing.) Many of the sorority houses were architecturally unique. 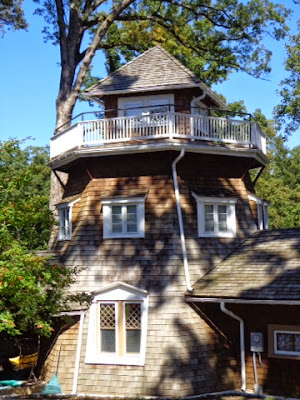 At the end of the tour we visited a small room that contains historical artifacts from the school, including yearbooks, sorority pins, and the like. A few items were also available for purchase, including three different postcards, which can be seen below. The organization which runs the tours is Save Our Seminary, and they also offer other events, including occasional happenings in the ballroom (which is otherwise very rarely used). Guided tours are held the fourth Saturday of most months, and only cost $5 per person.