Latvian communities in cities around the world gather in mid-November to celebrate Latvia's Independence Day. In many North American cities, the "recipe" for such an event still follows protocol established decades ago when the Baltic countries were Soviet occupied, and the events were somber occasions, calling for serious political speeches and the like. It can be difficult to deviate from established rituals and traditions, yet at the same time finding engaging speakers can be a challenge. I was excited to learn that the speaker at the DC area celebration would be Dr. Guntis Šmidchens, professor of Baltic Studies at the University of Washington. Being Latvian-American, he already spoke Latvian, yet later learned both Estonian and Lithuanian, and earned a PhD from Indiana University with a dissertation titled "A Baltic Music: The Folklore Movement in Lithuania, Latvia, and Estonia, 1968-1991." Professor Šmidchens has done extensive research on the role of singing in the Baltic independence movements, and has studied the culture of song festivals in all three Baltic countries.

However, a speech alone does not constitute a celebration! We began the day by raising the Latvian flag and singing the Latvian national anthem. Each school child then lay flowers at the base of the flagpole. 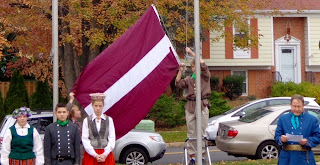 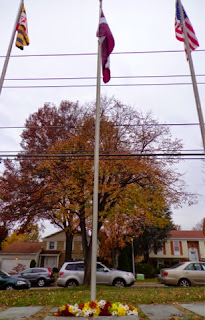 After a church service, we gathered for the main event. To begin, the school children entertained us with a folk song and two dances. While the group in the photo might look quite large, a number of students were actually missing, as the total number of Latvian school students in the kindergarten through eighth grade this year is 56 (and that does not include the litte kids' playgroup, which has an additional ten children).

The short performance was followed by Dr. Šmidchens' keynote speech, titled: Three Nations, One Desire: Song Festivals in the Baltic, Summer 2013 and 2014. His talk was nicely illustrated with historic photographs, and even more so with video he recorded as a participant in the 2013 Latvian song festival, and in the 2014 Estonian and Lithuanian festivals. He spoke of the similarities among the festivals - for example, pleas from conductors for the choirs to enunciate certain song texts more forcefully and more emotionally. Highlighting a couple of songs from each festival, from Latvia's event he mentioned Lūgšana and Gaismas Pils, while one of the Estonian songs he pointed out was "Mu isamaa on minu arm," which figures heavily in the fantastic documentary "The Singing Revolution" and which had left an impression on me when I saw the movies several years ago.

Dr. Šmidchens also touched upon the formal speeches given at the song festivals' main concerts. Last summer Estonian President Toomas Ilves, well known for his solid grasp of the power of modern technology, gave a brief speech, but immediately afterward took a selfie of himself and part of the giant choir behind him. As you can see from the President's Facebook page and the photo's 37,000+ likes, it was a popular move.


Last year Dr. Šmidchens published "The Power of Song: Nonviolent National Culture in the Baltic Singing Revolution," and this year it was released in paperback. All nineteen copies available at our event were quickly snapped up - I also purchased one for myself, and began reading it that same evening. The University of Washington Press has a short interview with the author in which he speaks about the book available on YouTube.

Dr.Šmidchens ' presentation was very well-received, and certainly one of the most interesting I've heard at such an event. After the formal portion of the event, once the reception (i.e. champagne and lots of fancy hors d'oeuvres) had begun, people lined up to chat with Professor Šmidchens and to request that he sign their copies of his book.

The Latvian community being as small as it is, my parents knew Dr. Šmidchens when he was a teenager and attended Garezers. I'd had some interesting conversations with him years ago at a Association for the Advancement of Baltic Studies conference here in D.C., when he tried to convince me I should further my education with a Master's in Baltic Studies (maybe I should have done that!).

On a separate note, this week marks my one-year anniversary of blogging. It has been interesting to get to know other bloggers, and I have enjoyed sharing some of my adventures and opinions. For the coming year I am planning what I foresee to be an engaging guest post series on a topic that is near and dear to my heart. A couple of people have already agreed to write posts -- look for those beginning in January. In the meantime, please do leave a comment, as I am intrigued to learn more about the people who read my posts!
Posted by Dziesma at 12:30 AM