Along with Christmas, December also brings the European Union Film Showcase at AFI. For quite a few years now I've made it habit to see several movies during the showcase; the offerings represent all EU member countries, and this year numbered fifty films! 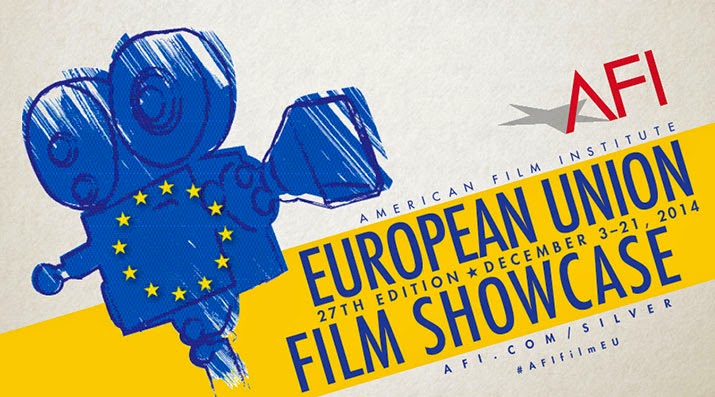 The movies I have seen during this showcase include: "The Imitation Game" from the United Kingdom, which will be a relatively big movie given the popularity of its current star Benedict Cumberbatch; the German film"Beloved Sisters" which is about the poet, playwright and historian Friedrich Schiller and his supposed love triangle with two sisters; and the Swiss movie "Clouds of Sils Maria", which stars Juliette Binoche and American actress Kristen Stewart.
"The Imitation Game" is about to be widely released in the U.S., but several friends and I jumped on the chance to see it earlier. Playing to a sold-out crowd in the AFI's beautifully restored main theater, the movie and its subject, Alan Turing, was introduced by Britain's Defense Attache in the U.S., Major General Buster Howes. The story of Turing's life reminds us fact really is stranger than fiction. He was, among other things, a cryptanalyst and pioneering computer scientist who helped decode the secret codes Germany used during World War II. Turing was also gay at a time when that was a criminal offense in the U.K., and was prosecuted for homosexual acts in 1952. The movie is excellent, and we all greatly enjoyed it. "The Imitation Game" has already garnered numerous awards, and is certain to win more. Just recently the Golden Globe nominations were announced, and the film has been nominated for Best Motion Picture in the Drama category, as well as for Best Screenplay, and Cumberbatch for Best Actor in a Drama.

An unconventional (and unconfirmed by historians) relationship between Schiller and sisters Charlotte and Caroline Von Lengefeld is the topic for the almost three-hour long period piece "Beloved Sisters." If you are a fan of typical romantic comedies, then this is not the movie for you! I rather enjoyed it, though, as it was a fascinating glimpse into the lives of mostly privileged and educated Germans in the late 1700s and early 1800s.

The Swiss movie was a disappointment - although it was somewhat interesting to see the "behind the scenes" life of a famous actress (played by Binoche), it was pretentious and generally rather boring, and was saved only by some of the gorgeous Swiss scenery.

Two screenings planned for the coming week are "The 100-Year-Old Man Who Climbed Out the Window and Disappeared" (Sweden) and "Uncle Tony, Three Fools and the Secret Service" (Bulgaria). I just couldn't pass up these movies for their great titles alone!

Naturally, the showcase features movies from the three Baltic countries, as well, although I will not be able to see any of them. The movie from Latvia was a strange choice: "People Out There" is in Russian, and previously I'd not heard anything about it. This year two films from Estonia were shown: "Tangerines" and "Free Range/Ballad on Approving of the World." Interestingly, "Tangerines" just received an under-the-radar Golden Globe nomination for Best Foreign Language Film! Lithuania's film "The Gambler" is the country's Oscar selection for this year, and features Lithuanian-American actress Oona Mekas.
Posted by Dziesma at 12:30 AM