Latvians love culture of almost any shape and form. Theater performances in Rīga can sell out weeks in advance, music is everywhere, even the smallest town in Latvia has an art or music school, and literature is held in high regard.

The house my parents bought when I was thirteen came with a billiards table in the basement. My parents owned so many paintings that some of the pieces were hung close together on the basement walls, leading me to call that space our "pool hall/art gallery." Their love of art was passed down to me, and I am happy to now own numerous artworks by Latvian artists.

Most of the pieces have been purchased in Garezers during exhibits there. Almost twenty years ago an extensive exhibit of paintings by arguably the best known (in the U.S.) Latvian-American artist, Jānis Kalmīte, was held in the Garezers art gallery, and most of those pieces were for sale. This was soon after he had passed away at age 89, leaving behind a lifetime's worth of artwork, mostly oil paintings. At the time, I was a college student with few extra funds. Yet I fell in love with one of the less expensive works, and arranged with the gallery director to pay in two installments. Unframed, it cost $150. A few years later, my parents had it beautifully framed as a birthday gift.

Kalmīte is known for his many variations of the Latvian farm building "rija." Almost every Latvian community center in the U.S. has one hanging on its walls, and many Latvian homes do, as well. My parents knew Kalmīte, as they worked together at Garezers, where the artist taught Latvian art history. The summers after my sister and I were each born, Kalmīte invited my mother to stop by for a visit sometime. When she did, he instructed her to pick out a painting - his gift to the newborns. What a nice friend to have!

Christmas cards that Kalmīte sent to friends often contained small watercolors or sketches. My parents received several of those. My mom had a couple of the tiny watercolors framed, and I was the lucky recipient of one. The third work I have by Kalmīte is a simple sketch, with the words "From the Garezers sketch book" inked on the front, and a short letter penned on the back. In the letter, written in the spring of 1985, he writes about working at Garezers that summer and of a recent trip to and exhibit in Germany. He finishes: “Tātad - uz redzēšanos, un sveicieni kundzei un princesēm." Translation: Alright then - see you soon, and greetings to your wife and the princesses. Yes, my younger sister and I are the royalty to whom he refers.

Three other works I own are by my dear friend Linda Treija, an artist who grew up and was educated in Latvia, but has lived in the U.S. for two decades. She and I met years ago at 3x3 (an all generations camp) in Garezers (where else?). One work was a commission - I asked her to illustrate one of my favorite folk songs, Lempim bija pieci dēli. The other two are illustrations - one of a man in folk costume from the town of Talsi, and the other of a girl in a folk dress from the Lielvārde area. These were created for a wonderful book written by folk costume expert Liena Kaugara. My reasons for purchasing these two specific pieces: my current folk costume is from Talsi, while as a girl I wore one from Lielvārde.

Several years ago the Garezers gallery organized a big art sale, and I purchased two small pieces. One, by the Latvian-Canadian artist Visvaldis Ķiķauka (try saying that three times fast!) was already nicely framed and matted, while the other was in a cheap old frame. The pieces have similar themes and colors, so my idea was to display them together once I'd gotten the one painting framed. Several years later I finally did have the piece matted and framed, and I absolutely love the result, although I've decided that they work better in different spots, not grouped together.

This summer, in conjunction with the Garezers 50th anniversary, the art gallery there will be holding yet another art sale. My good friend Līga Ejupe is the curator and director of the gallery, and she provided the following flyer with information. If you are interested in donating or selling a piece on commission, please do contact her. If you are interested in purchasing Latvian art, then visit the gallery in Garezers this summer between July 3 and July 12! 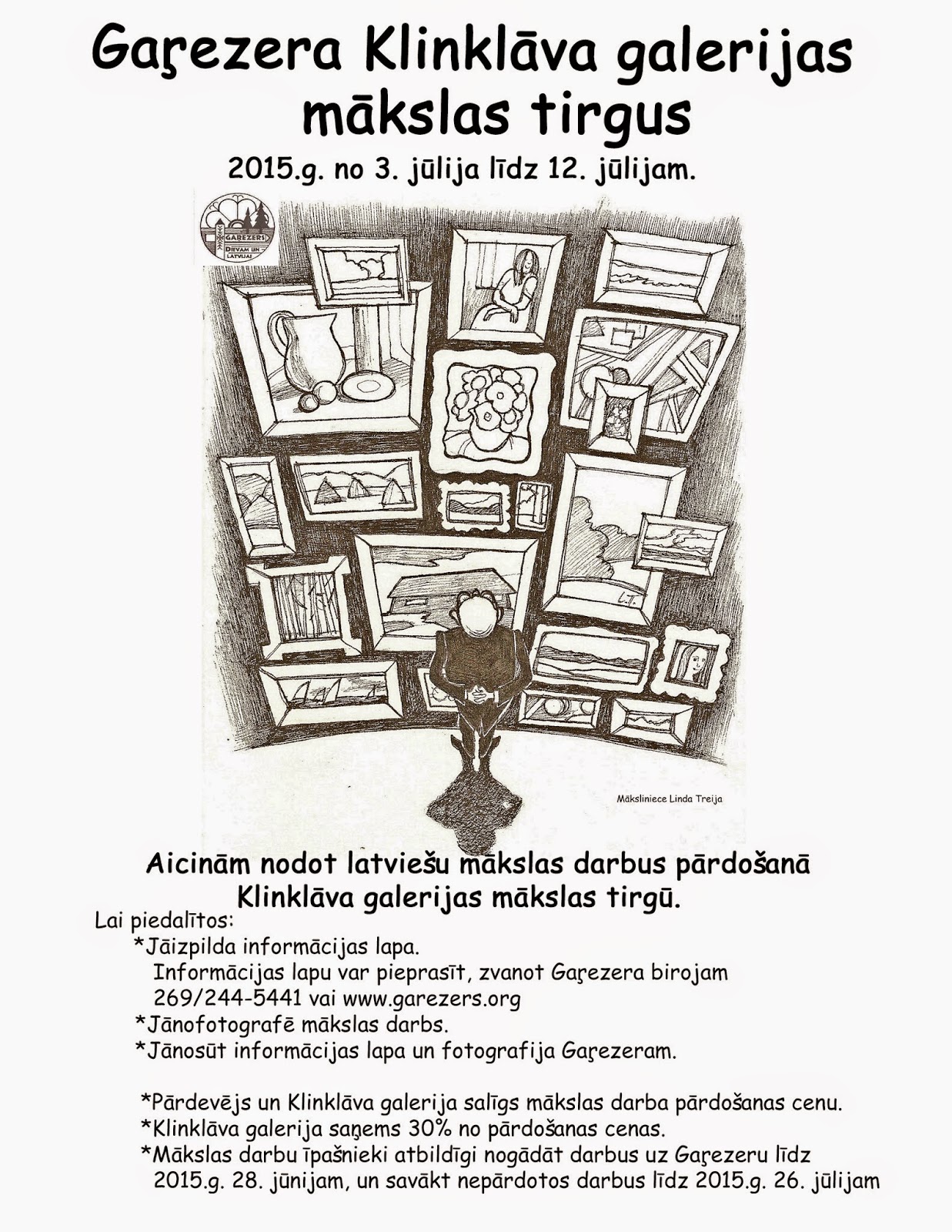