Occasionally before I go somewhere I think to myself, "This will be a great post for the blog!", but then the place or event or my experiences aren't all that wonderful. That is what happened with the National Book Festival, where I truthfully had hoped to see and hear at least a half-dozen authors, but real life intervened. Thus this post is shorter and less exciting than I had hoped!

From its beginnings on the East Lawn of the Capitol on September 8, 2001, when approximately 30,000 people attended the first National Book Festival hosted by First Lady Laura Bush, the Festival quickly grew and moved to the National Mall, and later begun its close association with the Library of Congress. Since 2014, however, the Festival has relocated to the Washington Convention Center, which - while not as picturesque and iconic as the Mall location - does have some benefits, such as air conditioning and actual restrooms.

I had attended and enjoyed the festival a number of times when it was located on the Mall, but had not attended in recent years  When I saw the impressive list of 175 authors who would be at this year's festival, I made definitive plans to go.

The Festival is enormous and very well-attended. With the Convention Center being so immense and spread out, and with getting a later start than planned, I was able to see only a couple of authors in whom I was interested, plus spot two famous writers as they were being interviewed by C-SPAN's Book TV (slogan: "Television for Serious Readers").

I also visited the exhibit part of the festival - the Library of Congress and several other organizations had tables full of information and freebies (all the paper bookmarks one would ever need!), and each state had a booth with varying amounts of information. 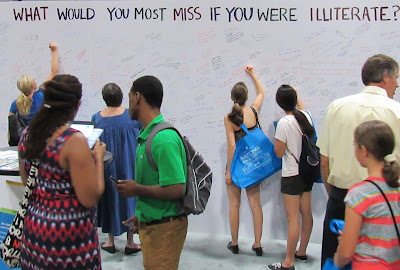 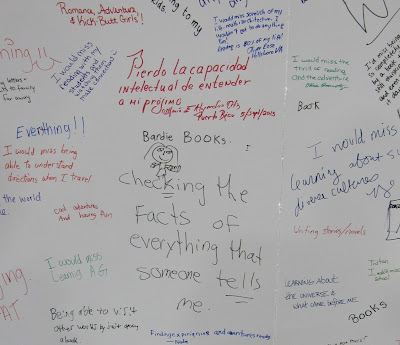 The local bookstore Politics & Prose was selling books by the many authors appearing at the festival, and most of the authors had designated times for signing books. Lines for the more popular writers formed early and were lengthy.

The only author whose entire presentation I heard was Stephen L. Carter. Interestingly, somewhat recently I had picked up one of his novels - and had not been able to finish reading it, as the writing did not hold my attention. However, I knew a bit about him, and was interested to hear him speak. He is an excellent public speaker, which is not surprising given that he is a lawyer by training, and his "day job" is professor at Yale Law School. Carter is an incredibly accomplished individual: after earning a bachelor's degree from Stanford and a law degree from Yale, he clerked for Supreme Court Justice Thurgood Marshall. He has written numerous non-fiction books, as well as six novels! It's difficult to comprehend how one person manages all of this, but he does, and he even spoke about writing being tedious - that he has even spent two weeks writing just one sentence!
One of many stands in the festival's exhibit portion was for Free Little Library, which is a wonderful initiative encouraging individuals and organizations to build and set up tiny libraries on their front lawns. People can both leave and take books from these little repositories. A good friend of mine here in the DC area put up a Free Little Library in her yard, and was kind enough to share a photo of the lovely library she has created - complete with Latvian "ausekli" or morning stars. Note also the gnome who lives underneath, complete with tiny picket fence.
Posted by Dziesma at 12:30 AM