America's Library - The Library of Congress

One of the most stunning buildings in Washington is the Library of Congress' historic Thomas Jefferson Building. While it can be visited and toured throughout the year, twice annually the Library hosts an open house.  During the open house visitors can also enter the famous Main Reading Room, which otherwise is open only to those with a reader's card. The open houses are held on Columbus Day in October and on Presidents' Day in February. Having first been awed by this amazingly intricate building during a conference last year, I made sure to find time to visit again during the recent fall event. 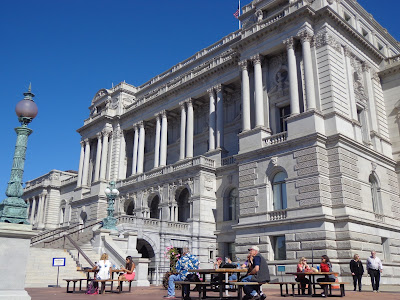 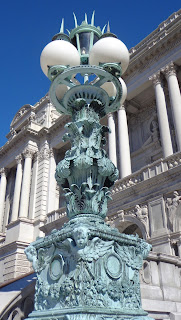 Built in the 1890s, the Jefferson Building is one of the most ornate public buildings in the U.S., and should be included on most tourists' lists of sights to see in Washington. Free public tours are offered several times a day, and only take an hour. You can also look around on your own in even less time. To celebrate the building's 100th anniversary, an extensive renovation was undertaken in the 1980s and 1990s when the entire structure was restored to its original splendor.
During the open house one could wander around several areas, and chat with helpful librarians and volunteers who were happy to answer questions about the building's history, as well as the work of the Library. The members room, for example, is typically off limits to the public, but we could peek into that, which was just as ornate as other areas.
The highlight of the day was being able to explore the Main Reading Room, which is impressive in its size and beauty. 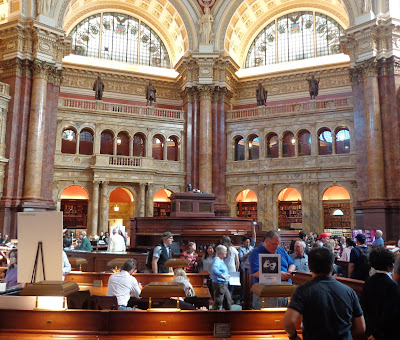 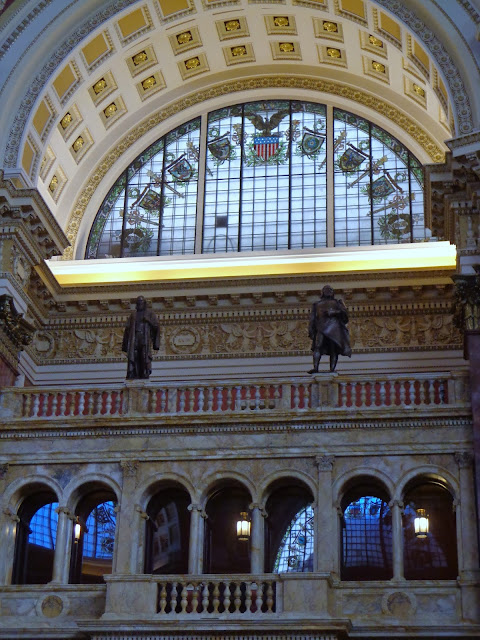 This enormous and gorgeous room has many fascinating details. For example, as the Library's website explains: "eight giant marble columns each support 10-foot-high allegorical female figures in plaster representing characteristic features of civilized life and thought: Religion, Commerce, History, Art, Philosophy, Poetry, Law and Science."
The rest of the areas open to visitors in the Jefferson Building are also quite photo-worthy and memorable. Because many of the prettiest bits are high up, they are difficult to photograph. The following pictures are of somewhat poor quality, but they were too interesting not too share!

For all of my teacher friends...

And for my artist friends...

After oohing and aahing over the fantastic building, on my way out of the Library I had to stop in the wonderful bookstore and giftshop, which has many fun and educational gifts and souvenirs. My favorite bookcase was this one... 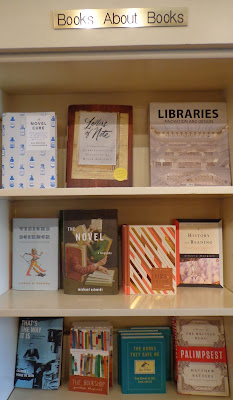 As you can tell, the Library of Congress is well worth a visit!
Posted by Dziesma at 12:00 PM