Washington is a city to which tourists flock, and for good reason -- with so many historic and free attractions, it is an ideal vacation destination. When one lives here, one occasionally forgets how many sights and historical monuments there are. On the same day I visited the Library of Congress, I met a friend for lunch near George Washington University, and given the stunningly beautiful weather, I decided to walk from the Foggy Bottom area (home to both GWU and the State Department) to the Library instead of taking Metro. Having slightly underestimated the distance, I walked over three miles, but the my brisk stroll was rewarding: the weather was glorious, and I noticed a couple of things I had never seen before, and photographed a few photos to share with my loyal blog readers.

The first part of the walk I passed newer office and apartment buildings which are not particularly scenic. Once I reached the White House, the views became more memorable. Due to recent fence jumping incidents, more barriers and fences have been set up outside the White House, and it's more difficult to get a good view. Besides you have all seen that photo a million times in the news!

Continuing toward the Capitol, there is quite a bit to see. Although I am no fan of Donald Trump, I suppose it's good that his company is renovating the previously under-utilized Old Post Office Pavilion, which occupies prime territory on Pennsylvania Avenue, not far from the White House or the Capitol. Next year the renovated building is slated to open as a luxury hotel. 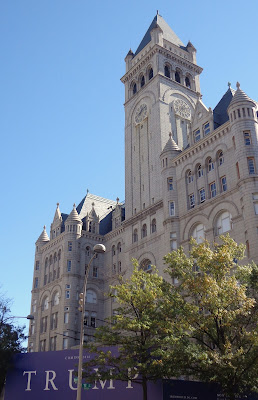 Behind the National Archives (best known as the place where visitors stand in line to catch a glimpse of the Constitution), I spotted this statue and spot-on saying.
Once a tourist has visited the many free museums and sights in Washington, the Newseum, a museum about news and journalism, is worth a visit. If you don't have the time (at least a couple of hours) or money ($22.95 plus tax for regular admission), at least walk past the front of the building, where that day's front pages from newspapers from each state are displayed. Front pages of even more newspapers can be viewed online.
Next door you might be surprised to spot a row of Canadian flags, but there's a logical explanation - the Embassy of Canada has a slightly unusual location here on Pennsylvania Avenue. Many embassies are located on Massachusetts Avenue or in other areas not quite so close to the U.S. Congress and President.

Then I continued on to the front of the Capitol, which is currently looks different due to scaffolding because the dome is undergoing restoration. As is often the case, a school tour group was taking a group photo between the reflecting pool and the Capitol; they had just begun to disperse as I walked up to the pool, but I managed to snap this photo which I have titled "Portapotties & Pink." 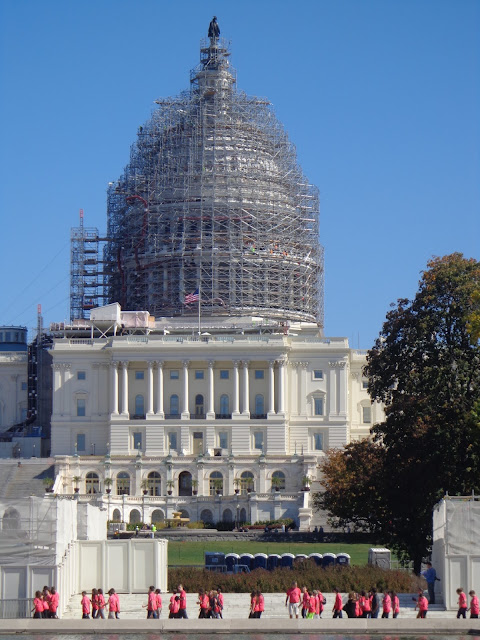 The scaffolding on  the dome is quite impressive. Theoretically it should come down by Inauguration Day 2017, but I have heard through the Washington grapevine that the renovation will most likely take longer.

After my Library of Congress visit I walked from the Library to Union Station to catch Metro, and that meant passing the highest court in the land, the Supreme Court. I must confess that I had never taken the time to inspect this impressive structure, which looked even more majestic in the bright sunshine, with an shockingly blue sky behind it. 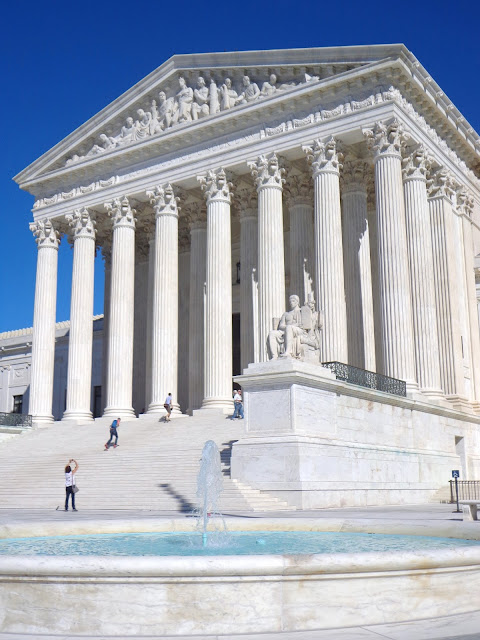 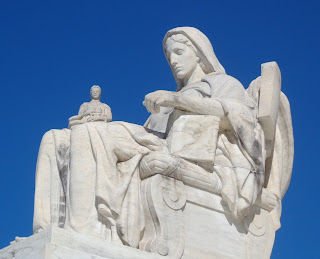