To continue my travelogue about friend L's and my trip to Arkansas (which began in this post)...

Given the short duration of our trip, we had a great deal we wanted to pack into a couple of days. The next morning the museum (aka Crystral Bridges Museum of American Art) opened at 10am, and we arrived at 10.15am. 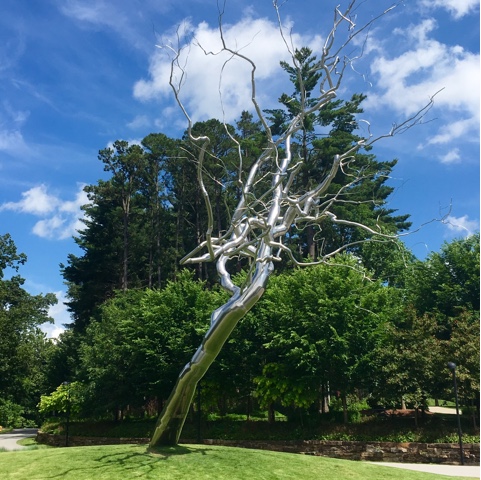 At least one friend had jokingly asked me whether the museum would have greeters as Walmart stores do, and - unsurprisingly - it sure did. The greeter directed us to the admission desk (although there is no admission fee), where we were provided with one brochure that covers the indoor collection, and one that covers the outdoor trails and collection. We asked to make a reservation to visit the Frank Lloyd Wright house, and the earliest time we were offered was 3.15pm -- we looked at one another, shrugged -- yes, after all we traveled hundreds of miles, and then were all set.

Before setting off on our explorations of the collection, we made our way to the basement to use the ladies' room. A space outside the restrooms contained a couch -- and an art film, which we watched, then returned upstairs begin our independent tours.
Walking and each looking at our own pace, we spent a good two hours exploring the permanent collection, which was impressive in its breadth and diversity. In this post and the next, I have included many photos of works which I liked or was somehow touched by or interested in. 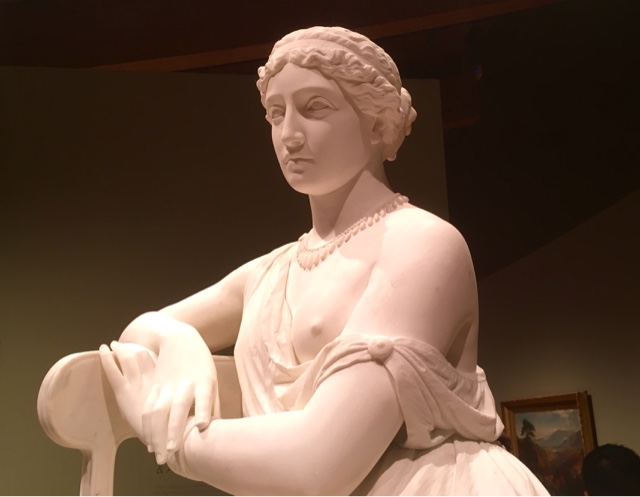 The painting above was very pretty, but did not photograph well, yet I am including it here due to the interesting life story of its artist. As explained by the informative sign next to the work in the museum, "born to Scottish-Canadian father and African-American mother Duncanson established his career in Cincinnati, but left for Canada during the Civil War, searching for a place where racism would not affect his profession as a painter. When Duncanson arrived in Montreal, he was warmly received, and he exhibited his works there to great acclaim." What a shame that talented people are driven from their homelands due to society's narrow mindedness.