Memorial Day weekend weather in the DC area was as spectacular as I can ever remember. This year all three days the weather was glorious - a truly wonderful kick-off for summer. (I would be overjoyed if DC's upcoming summer is cooler and less humid than usual, but that probably will not be the case, at least not according to the Capital Weather Gang's Summer Weather Outlook. Also, the rest of May has been rather toasty - it was on track to become the warmest May ever recorded. )

A friend and I took advantage of the circumstances, and made our way to the town of Williamsport, Maryland, which is situated on the C&O Canal, near mile 99 on the towpath. First we checked out the visitors center, which is only open Wednesdays through Sundays, and is located in an old coal warehouse. I purchsed an in-depth guide, which blew my mind, as it turns out that the distance between mile posts is not always exactly a mile! In essence, if you think you've walked five miles - you might not have!


On this walk, we hiked approximately four miles by rambling out to milepost 98, and then back to mile marker 100. The area includes a half-mile re-watered section of the Canal, plus the Potomac River and the Conococheague Creek. 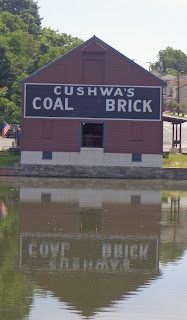 In the area of the Canal closer to DC, I'm accustomed to seeing many turtles enjoying the sun, but here we saw several much larger turtles, plus one adorable baby who posed quite nicely for me. 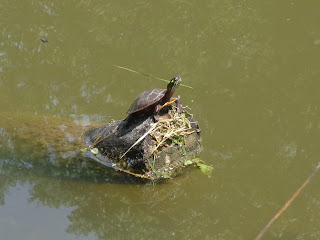 Part of the canal is green with algae, but it made for good contrast to this goose family. 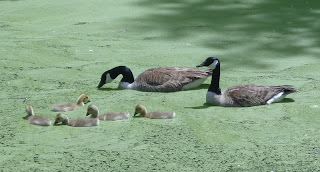 An old lockkeeper's house is also located in this area. 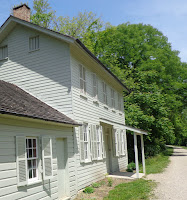 We were so busy peeping at nature, and snapping photographs in this area, that we waltzed right past the mile 99 marker, and had to keep an eye for it on the way back. 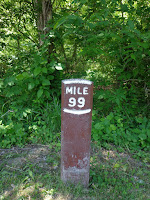 Although most of the towpath is rather quiet, it does run under Interstate 81.
Any noise, however, did not bother the mamma groundhog and its baby we spotted napping on a rock. Mom ran off before I could capture the duet, but I did manage a snapshot of Junior. 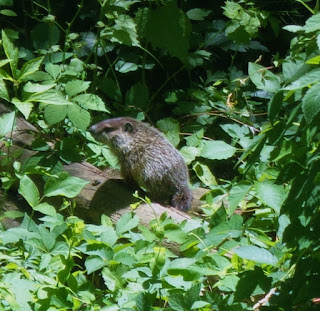 Another creature we spotted was this shiny bright green beetle, and I managed to snap a portrait before it scampered off. 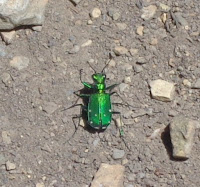 After our walk we drove the short distance to Williamsport's main street, and stopped at the Desert Rose Cafe. The Tuscan chicken bean soup I ate was flavorful, and the scoops of ice cream we choose for dessert were creamy and very reasonably priced. The Cafe is welcoming to cyclists and hikers - they'll fill up your water bottles and Camelbaks. I also saw a waitress bring a large bowl of water out to a canine customer.

On our way back to the DC area, we stopped at a Washington County park called Devil's Backbone. located on Antietam Creek. The weather was so lovely that all I wanted to do was stretch out in the grass on a blanket. The park was busy with many others out enjoying the day - there was a large kids' party, a number of individuals were fishing, and shortly before we left several beautifully restored Model-Ts showed up from the local Model T club. 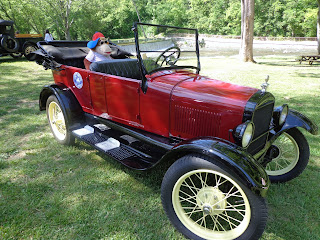