We have had more 90+ degree days this year than I care to count. June 21 was yet another one - plus humid and muggy to boot. Still, that morning I met a friend for a stroll in Rock Creek Park. My afternoon was spent taking care of various tasks, but having checked most of them off my "To do" list, and given that it was the longest day of year, I decided to visit one of my favorite spots in the area, Great Falls at the C&O Canal. This small section of the park and canal towpath is typically full of people on Saturdays and Sundays, but by the time I arrived at 8pm, only a few cars remained in the parking lot.

On my way to the falls overlook, several other visitors and I were surprised to see a beaver appear on the towpath. It seemed a tad confused, probably because it had a small crowd of spectators, but eventually ambled from the river side over to the canal side, and dove into the canal's murky waters. This was my first ever wild beaver sighting, and I must say it's not a particularly attractive animal! I wasn't quick enough to take a good photo, but in this one you can at least see its large tail. 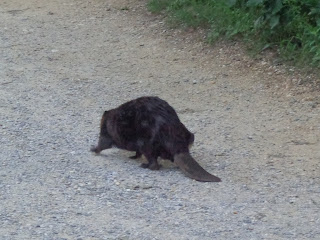 Due to the recent rains we've had, the falls looked great. 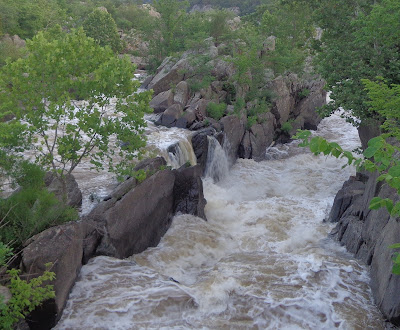 Only after I left the falls overlook did more pink appear in the sky, and on my way back to the parking lot I managed to capture a bit of that.