Latvian connections and Digging up the Past, Part IIA

Two years ago, in March 2012, I had the fantastic opportunity to visit friends in a lovely locale, and thus an amazing vacation in Belgium and the Netherlands took shape.

My friend lived in apartment in the heart of Brussels - mere steps from the Royal Palace. I was able to spend a couple of days exploring the city, which I found to be more interesting and attractive than word on the street has it. Of course, I might have been unduly influenced by the vast quantities of chocolate I snacked on! Just as major American cities have a Starbucks on every corner, Brussels seems to have a gourmet chocolatier on every other corner. As a chocoholic and true chocolate snob (dark chocolate, please, and don't even try to pretend that a Hershey's Bar is worth eating or that Special Dark is actually true dark chocolate!), I was on cloud nine.

Grand Place, Brussels' main city square, is quite attractive in the daytime, but in the evening hours, shortly after the sun has set and the sky is still blue, the square takes on a soft romanticism with the ornate historic building beautifully lit.

On a weekend day, my friends and I ventured to the gorgeous towns of Ghent and Bruges. While Bruges is better know, I was also impressed with Ghent, which is Belgium's second largest city. The historic center of town, however, feels quite quaint. Unfortunately, the weather was quite chilly and gray, although we were later blessed with a few rays of sun in the afternoon. In Ghent we warmed up by enjoying a traditional Belgian meal of waterzooi, a chicken stew, at a cozy restaurant.

Another spot that I loved visiting was a store called Dille en Kamille. I was introduced to this fun shop when my younger sister lived in the Netherlands. The best American comparison would be 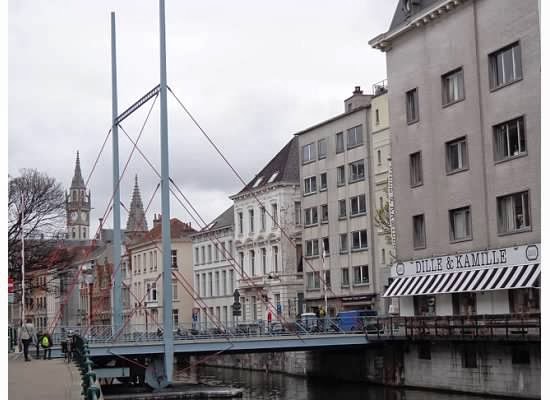 Crate and Barrel, although maybe a slightly less expensive version and without furniture. Later I found the same store close to my friend's apartment in Brussels, so was able to stock up on various gifts and souvenirs there, as well. If you are ever in the Netherlands or Belgium, I highly recommend hunting down a D&L location!

After wandering around the charming streets of Ghent, we drove onto the better known Bruges. Unsurprisingly, the historic center of Bruges is a UNESCO World Heritage Site, and you can see why tourists flock to it. Earlier in the year, the New York Times had written its "36 Hours in..." travel piece on Bruges, so I had a couple of places I absolutely wanted to see. Naturally, two were chocolate shops. While many chocolatiers in Belgium have traditional-looking shops, Babelutte by Bartholomeus has a much different feel to it. Shying away from the brown color palette favored by many, the interior walls are stark black and white, with the boxes of chocolates providing splashes of color - very modern. As for the chocolate, it was delicious! I regret not purchasing a box of white chocolate with strawberries and basil -- that was wonderful.

We were happy to spot the sun for a while during our walk around town. There are innumerable beautiful buildings and scenes in Bruges. Neither my words nor my snapshots will do it any justice. 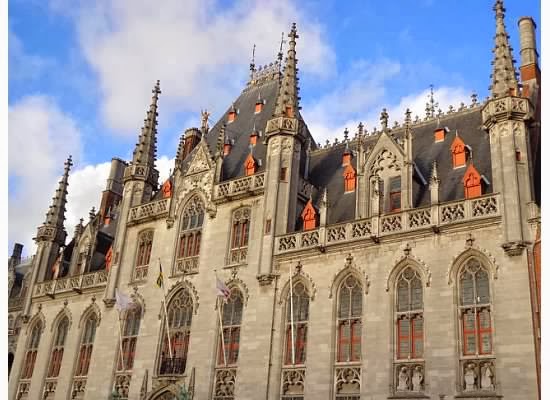 Soon enough I was ready to sit down and enjoy a traditional Belgian snack, so we found the small bistro, Chez Vincent, mentioned in the New York Times, for fries and other fried snacks.
Spending a mere day between Ghent and Bruges was not enough - I look forward to returning in the future!