In conjunction with Riga being European Capital of Culture for 2014, an infamous building known as "Stūra māja" (corner house) has been opened to the public for tours and special exhibits. Its infamy is due having been KGB headquarters in Soviet-occupied Latvia. 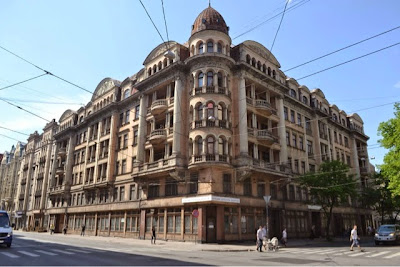 The building and exhibitions have received extensive coverage in the foreign media, including this article in the Daily Beast, while the Spanish newspaper El Pais named it one of thirty most enthralling destinations.

The building is located at the corner of Brīvības and Stabu streets near the center of Riga. Before World War II, the building was used by a variety of Latvian government agencies, including the Border Guards. After the War, however, the KGB chose it for its headquarters and prison, in part due to the structure's cavernous basement, which was converted to prison cells, and the many hallways and stairwells, which made it convenient for secretly transporting individual prisoners.

If you visit Riga before October 19 (when the exhibits close) I highly recommend making time for at least the one free-of-charge exhibit and one tour of the "basements." More information in English can be found here on the Riga 2014 website. Unfortunately, the information is a tad confusing. The following was our experience - maybe it will help someone else!

There is a free-of-charge exhibit on the first floor, and which can be entered via the building's front door exactly on the corner of Brivibas and Stabu. The exhibit gives a brief overview of the building itself, and of Latvia's recent history in terms of the Soviet occupation. It is very helpful in terms of understanding context, particularly for a visitor who might not know all that much about Latvian history or of Soviet control methods.

The exhibit area on the first floor is also where the execution room is located. One cannot enter the room, as a plastic shield is in the doorway. A box displays bullet casings found in the room after the first Soviet occupation during WWII and saved for decades. In true Latvian fashion, a fresh bunch of flowers was placed at the entrance in memory of the victims who were unjustly murdered here. I was able to glance into the space for only a moment, and I was unable to watch an excerpt from a fictional movie which shows what 'typical' KGB executions were like. Total time needed for visiting this first-floor exhibit is between 20 - 45 minutes (depending on how quickly you read, how many other visitors are present, etc.). 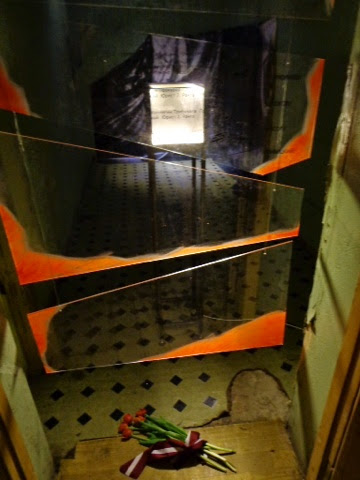 The basement or cellar tours are a tad misnamed, as the tour does not spend all 90 minutes in the basement. However, that is "main attraction" - so to speak - of the tour, but honestly other areas were just as interesting. Tours are offered in several languages, most frequently in Latvian and English, and are scheduled for specific times. Tickets for the tour are 5 Euro a person, and are available at the ticket window in the courtyard (entrance from Stabu iela). The tours are quite popular, so I recommend buying your ticket ahead of time.

We had a number of local Latvians in our English language group, as the Latvian tours were sold out for the day. Because our tour was the last English one of the afternoon, the 90 minutes stretched out into almost two hours. One additional bit of advice: it is chilly in the entire building, but particularly in the basement. I was glad that we were close to the apartment, as I was able to pick up a sweater to wear over my t-shirt before the tour began, but some of the other women in summer clothing were definitely cold for the majority of the tour. Our guide, Krista, had excellent English and did a fantastic job of explaining many different aspects of both the building's and Latvia's history.

There are also additional exhibits - many of which sounded interesting and moving - in the building, but we ran out of time to visit them on that day, and would have had to buy new tickets (the 5 Euro ticket apparently covers those as well - but only on the same date) to view those exhibits on a different day.

Stops on the basement portion tour include prison cells, the prison kitchen, and one of the interrogation rooms. The guide explained how horrible sanitation was - prisoners were allowed one bathroom visit per day, otherwise they used buckets in their cells. Climbing up from the cellar we used the same stairs that prisoners and guards had utilized - complete with wiring to prevent a prisoner from trying to escape or jump to his death. 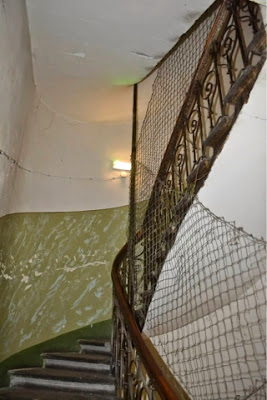 We were also shown the very small courtyard where prisoners were allowed short exercise breaks - always under the watchful eyes of at least a couple of guards.
The tour continued onto other parts of the building, including the room which prior to WWII had been the office of general Ludvigs Bolšteins, who was in charge of the Latvian border guards. He was a patriotic Latvian who was deeply disappointed that the President of Latvia, Kārlis Ulmanis, decided to not put up a fight against Soviet aggression. Given the general's severe disappointment and his knowledge of state secrets, Gen. Bolšteins committed suicide in his office on June 21, 1940. His original office furniture had been saved for decades by his relatives and is displayed. 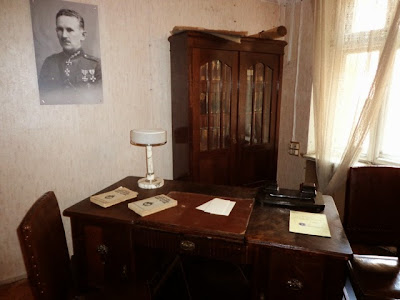 I found the most moving portion of the tour to be the "Dievs, Tava zeme deg!" room. "God, Your Earth is Burning!" is an emotional cantata with lyrics by poet Andrejs Eglītis and music by Lūcija Garūta. It was written in 1943, during the height of the war, and it premiered on March 15, 1944 when much of Latvia was once again occupied by Soviet forces. As Wikipedia explains, this musical prayer "is part of Latvian Cultural Canon in music, recognized as one of most important Latvian musical pieces of all time." It was banned during Soviet times, but performed quite frequently in the West in the 1980s, which is why I am so familiar with it. Overhearing some of the young Latvians on the tour say that they had never heard of it struck me as sad, because it is an incredibly powerful and heart-rending choral piece to hear, and one that is historically very significant. 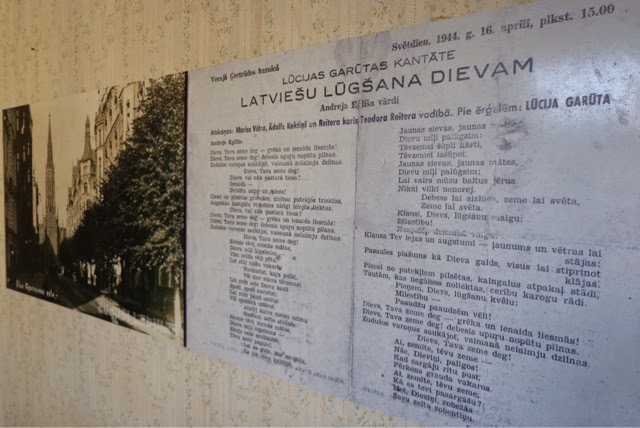 The exhibit features the text of the piece in the original Latvian, and translated into several other languages. The guide played a just part of a recording, as the entire cantata is 40+ minutes long. For non-Latvian visitors it might be slightly interesting (or not!), but the song reminded me of the horrors and tragedies that Latvia and its people - including my family - experienced in the last century.

After the tour we exited back out into the courtyard, which is draped in a gorgeous and enormous Latvian flag - a fitting tribute and reminder. 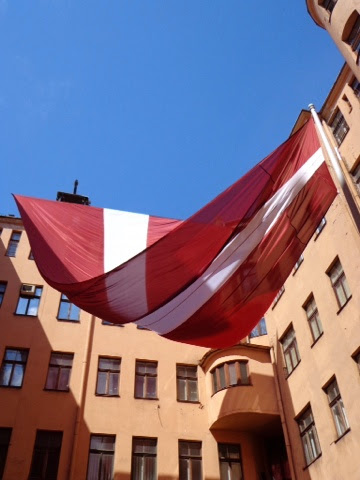