Harper's Ferry National Historical Park is a short drive from the DC area, and well worth a visit due to its natural beauty and rich history. I had visited as a kid many moons ago, and once five years ago, but a friend and I decided to revisit the park on a recent Sunday. Harpers Ferry NHP is a bit challenging to describe. It is both a beautiful natural area in which the Shenandoah and Potomac Rivers meet, and a historic town, in which some of the old buildings belong to the park and contain exhibits, while other buildings are the homes and businesses of some of the 300 town residents. The park is located in three states: West Virginia, Maryland, and Virginia, but the town of Harper's Ferry and the park's main entrance are both in West Virginia.

Entrance costs $10 per car, and plenty of parking is available near the Visitors' Center, from which you then ride a shuttle bus down to the "Lower Town" (or you can walk, although the walk is not all that fascinating nor particularly short - hence the available shuttle bus). We had decided to participate in one of several free guided tours led by a park volunteer or ranger, so we boarded a special bus with the tour group.

The tour was called "From the Top Down," as we got off the bus at the town's highest point and then made our way down to the center of town. Our guide was a park volunteer, a man who'd spent most of his life in Harper's Ferry, having moved to the area when his father was appointed superintendent of the park. The gentleman was a veritable encyclopedia of knowledge about the area. The tour was advertised as being 90 minutes long, but lasted about two hours. The tour made a number of stops, including Jefferson's Rock on which Thomas Jefferson had stood in 1783. He was so impressed by the view that he wrote, "This scene is worth a voyage across the Atlantic." 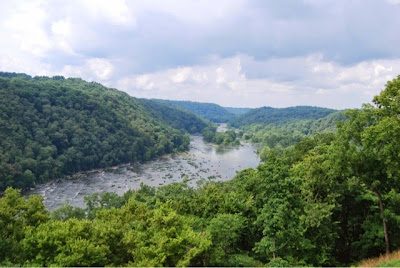 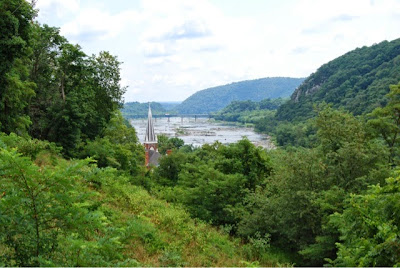 We also visited an old building that had been a part of Storer College. The school was established following the Civil War, in 1865, to educate freed black slaves, as the majority of them were illiterate and found it difficult to integrate into society without any type of education. Young women from northeastern towns came to Harper's Ferry to work as teachers in the school. The building we visited has fallen into great disrepair, although one room is open to tours so that visitors can see what a typical classroom might have looked like back in the day.
Immediately in front of this building is the town cemetery, which contains the grave of the town's founder, Robert Harper, as well as several interesting headstones. This is where we learned that the original name of the town has been "Shenandoah Falls at Mr. Harper's Ferry." Has a nice ring to it, doesn't it? 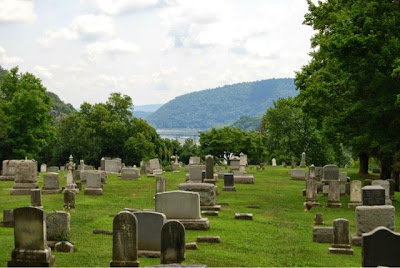 After the end of the tour, we visited the local Roman Catholic church, strolled across the bridge, walked a bit of the C&O Canal towpath, enjoyed some frozen custard (I can highly recommend the Swiss Miss Inn - their peach shake as well as their chocolate frozen custard were heavenly!), learned more history through some of the exhibits in the Lower Town, and ambled along the river. 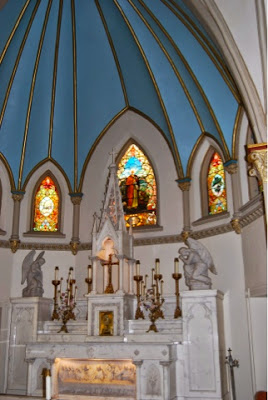 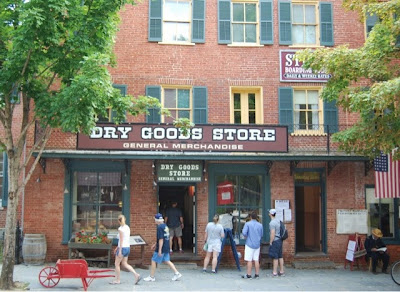 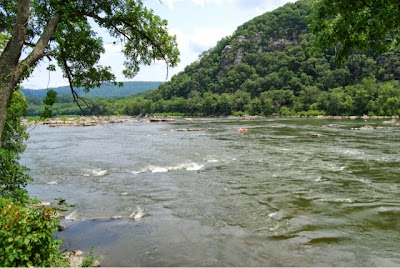 When we decided to head back to the car, we weren't near the shuttle bus stop, but we saw a sign indicating that the Visitors' Center was one mile, so we decided to hoof it. Ha, that sign wasn't quite correct, as it was closer to two miles, including a climb up some stone stairs which were not insignificant. However, the stairs were located next to an adorable waterfall! It was the type of relaxing waterfall at which one could actually sit down, and which had little streams perfect for dipping one's tired and hot feet. 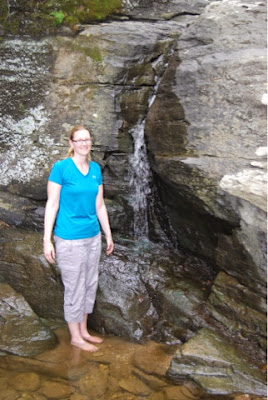