Jet lag is a pain! The following morning Bryan and I both woke up at an ungodly hour of the morning. Bryan decided to head back to Kolkas rags to photograph the sunrise. He had little luck in seeing the sea and gulf waves meet, plus the types of stunning sunrise photos he'd hoped for were thwarted by clouds and fog. Below are a few of his shots - interesting, but not quite what he had expected. If you can spot a little black dot on the horizon, that is the Kolka lighthouse. 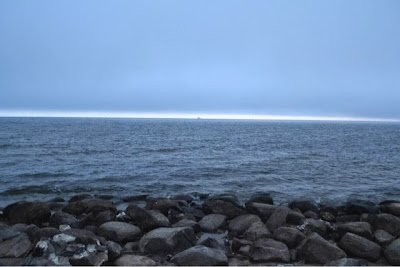 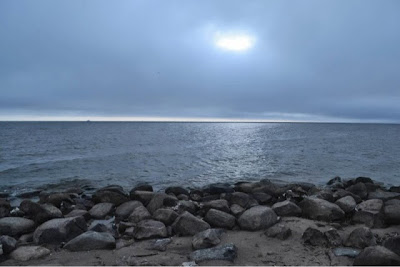 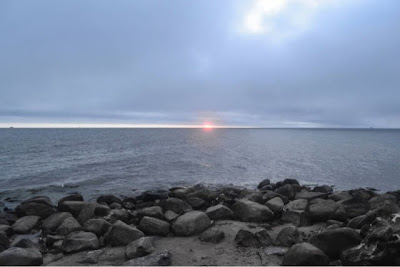 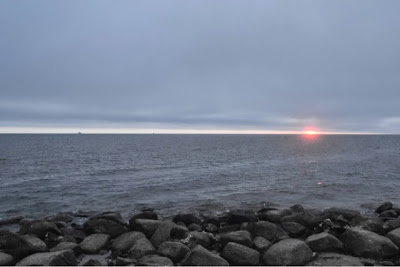 Seaside weather, however, is unpredictable and changes quickly, which meant that a couple of hours later the early morning fog had lifted, and the clouds had been chased away by bright sunshine. It was 7am when we drove to Kolkas rags yet again, and were greeted by stereotypical blue sky and blue sea scenery. We strolled around, letting the fresh sea breeze and lovely surroundings dissipate our exhaustion. 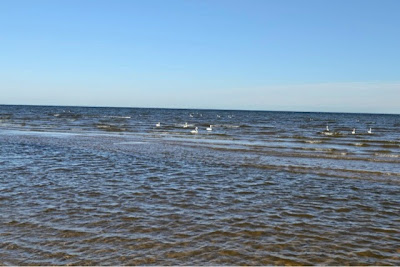 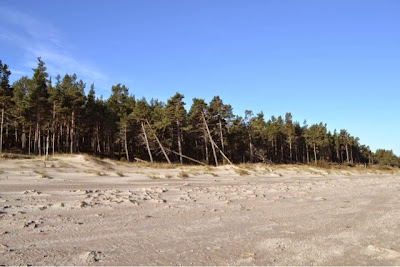 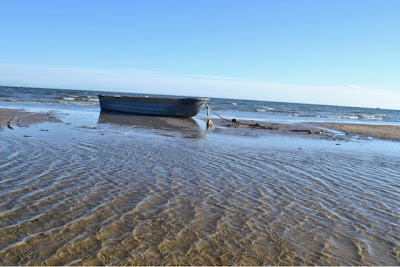 A new bird watching tower was recently built on Kolkas rags, just steps from the beach, and despite the small and vague sign warning people to stay off, we climbed to the top. The park is home to an amazing variety of birds: 261 species (while in Latvia as a whole there are 338 different species). More than half of them - 140 - are endangered species in Europe! For more information (in Latvian) about some of the more common bird species in the area, check out this PDF from the park's website. On a clear day the tower affords a wonderful view out to sea and into the forest, but because I am not a fan of open heights, I was eager to climb down rather quickly. Besides, it was time to get back to the hotel for breakfast, and there is little that will stand between me and a meal! 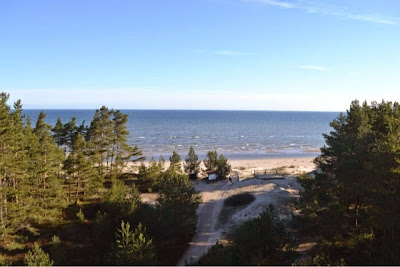 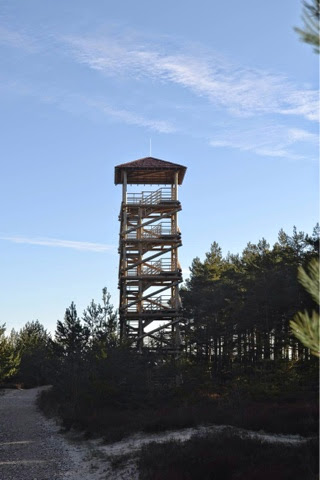 After our filling fried egg and sausage breakfast, we drove to meet Vilnis, a biologist who has worked in Slīteres National Park for thirty years. I had arranged for him to guide us around the park for a couple of hours. I follow Vilnis on Twitter, where he posts stunning photos of sunsets, flowers, animals, and forest and water scenes. He knows the park inside and out, and was a fantastic tour guide - knowledgeable, friendly, funny, down-to-earth. Although the park has maps and trails, they are not marked in the way American national or state park trails are. Had we gone out for a hike on our own, I am afraid we might have gotten quite lost. Bryan might claim otherwise, as he is better with directions and at map reading, but without Vilnis we certainly would not have experienced as much as we did. For me this excursion was certainly one of the highlights of the trip.

First we hiked a forest trail - at times going off trail to look at something that Vilnis wanted to point out, such as an old beaver's dam - near Pēterezers, or Peter's lake, which is really more of a pond. Parts of the walk were along a boardwalk. One funny sight he showed us was a tree that a beaver had attempted to cut down - twice. Yet the tree's branches were interlaced and jumbled with the branches of neighboring trees, so it was not possible for the tree to fall over. The hike included a stretch along a somewhat recently built boardwalk right on the pond. The peace and quiet in the park was amazing; we did not meet another human being, and we heard many different bird calls. Vilnis pointed out wild garlic, which although protected in Latvia, grows abundantly in the park, and I tasted wild blueberry blossoms (oh, how I would love to pick blueberries there later in the summer!). He said that the park is busiest late in the summer and in the fall when Latvians love to venture outdoors to pick wild berries and mushrooms. 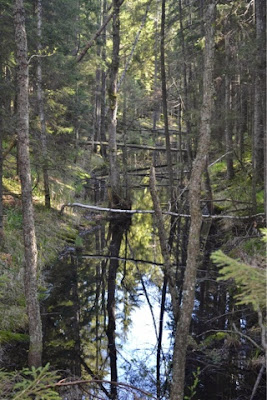 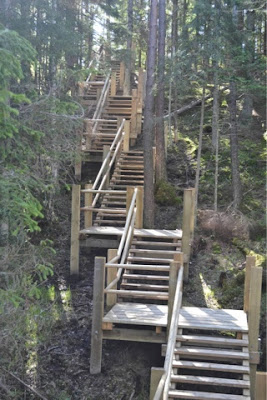 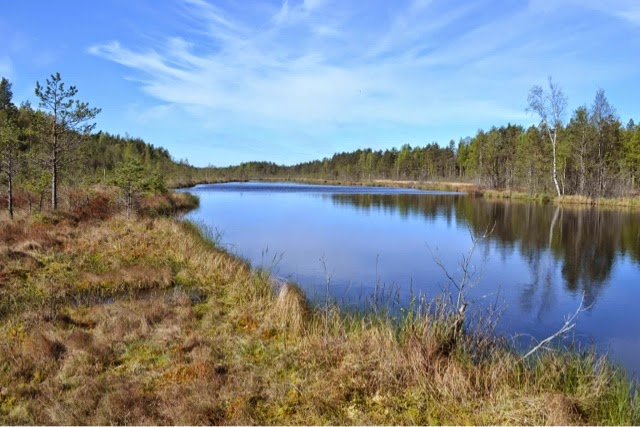 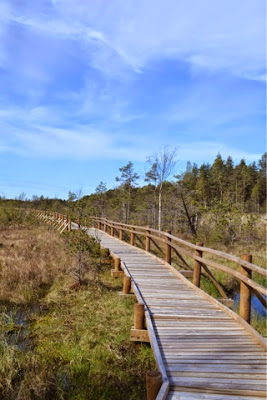 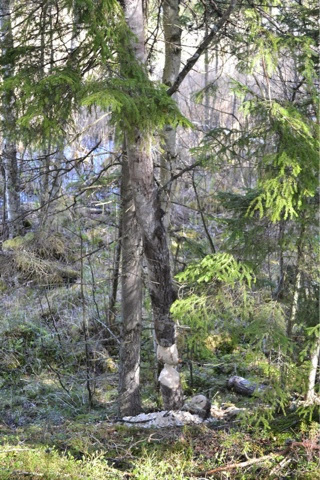 After our walk through the woods and along the pond, we jumped into the car and drove to the Slitere lighthouse. Built in 1849 as a lookout tower for forest fires and as a navigation landmark for ships, it stands 5km from shore. The building had a light in it until 1999, but since 2000 it has functioned only for tourism purposes. We paid our 1 Euro each to enter, and Vilnis received a key from the woman working behind the counter. Turns out that a special treat in our tour was the ability to climb to the very top of the lighthouse - up very steep roped-off stairs, through a trapdoor, into the little room where the light used to be and which is now full of bird crap - and then outside! Given the clear day, the views were gorgeous! 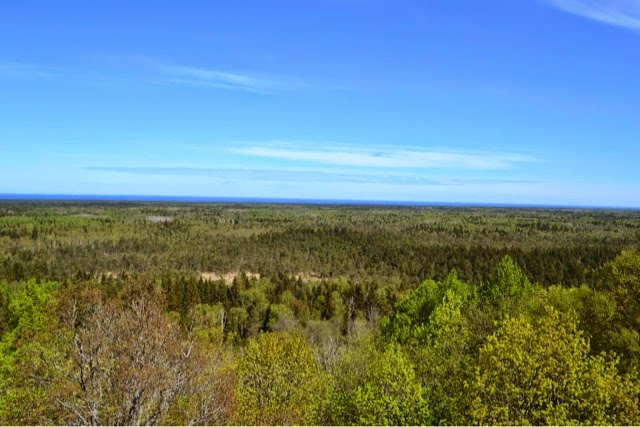 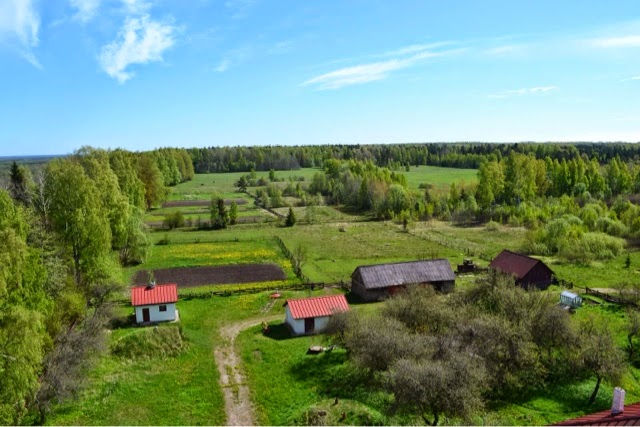 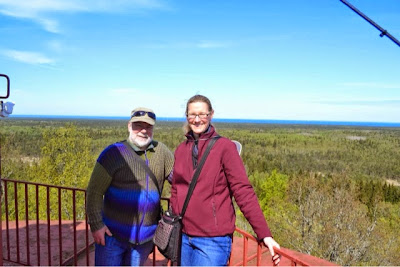 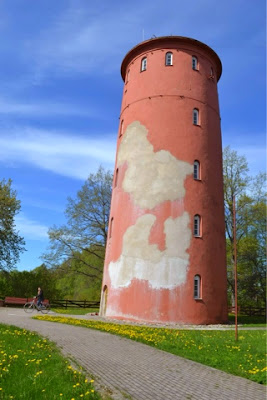 Once we were done enjoying the views, we left the lighthouse, and climbed downhill toward the Slitere nature trail, which is in protected territory and therefore can only be visited if accompanied by a park employee. A series of steep stairs lead us down to a boardwalk, where Vilnis once again told us all sorts of interesting details - about the "odzes" or adders (Latvia's only venomous snake) which like to lie in the sun next to boardwalk, about the wild animals also finding the boardwalk useful, about the useless ditches that were dug in the area over 100 years ago. This boggy area is thick with old trees, but luckily the area had not been attractive for logging before it became part of the park because there was no way to remove the cut trees from the woods and transport them up the steep hill. 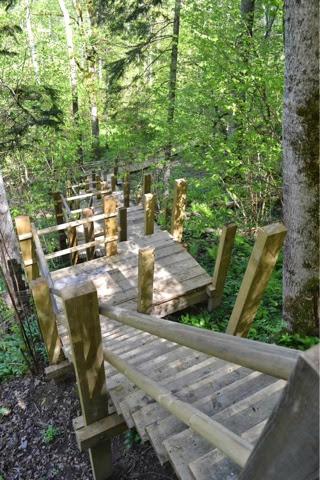 After walking the entirety of the circular boardwalk, we slowly climbed back up the stairs and returned to the car. Bryan and I drove Vilnis to his home, bid our farewells (he promised that on any subsequent visits he'd show us different sights!), and headed on our way, leaving the park behind. As we drove south toward Ventspils, our final farewell was provided by a beautiful orange fox jogging across the road. Once we slowed down, she darted into the bushes and was too quick for Bryan to snap a good picture, but she reminded us that this park belongs to nature, not to humans. 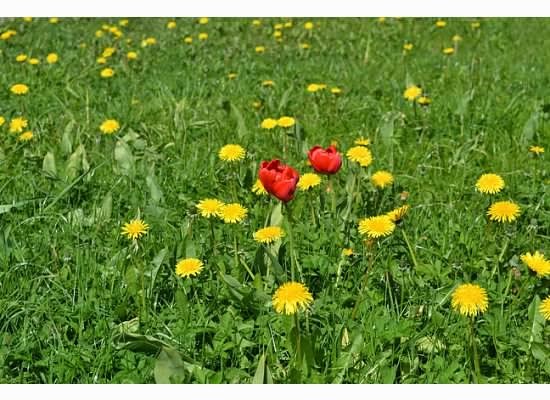