In recent years I have said a little prayer to whichever gods are responsible for aviation whenever I head out on a vacation which involves flying. My requests are the following:
Nowadays I realize that a plea for decent legroom is ludicrous, so I don't bother with that. However, if at least three of the above requests are granted (okay, okay, two is fine as well, considering it's rather rare to have a crazy person on your plane!), then I consider it to be a smooth and successful flight.
We flew SAS, aka Scandinavian Airlines, from Washington Dulles to Copenhagen, with a connecting AirBaltic flight to Riga. Our flight from Dulles left and arrived on time, and our layover in Copenhagen was brief. When we arrived in Riga at 11am, we watched as other passengers picked up their suitcases at the baggage carousel...and then the carousel stopped turning. Upon inquiring at the baggage office, we learned that our suitcases were still in Denmark, and were told that they would most likely be on the afternoon flight and to call around 4pm to find out.

Thus, instead of picking up our rental car and immediately hitting the road as we had planned, we found ourselves hitting the mall after renting the car. Luckily, I had already investigated that Spice would be the perfect place to pick up some groceries and a mobile phone SIM card upon arriving, and in this case it was a rather convenient place to kill several hours. We ate lunch at the LIDO restaurant, providing a good intro to Latvia for B, and re-introduction for me. LIDO is a chain of Latvian restaurants which offer a large selection of decent (although slightly greasy) food, served cafeteria style: you walk around to different stations (meat, fish, salad bar, potatoes, pancakes, juices, desserts), choose whatever you like, then pay at the register and find a table for yourself and your relatively expensive but reasonably tasty Latvian food. If you are ever in Riga, you must eat at a LIDO restaurant at least once!
A pleasant surprise came as we were investigating SIM card options. B had a simple smart phone he'd purchased before his European vacation last year, and all we needed was a local Latvian SIM card plus a short-term plant that would allow us to text and call. I found the explanations and options confusing at the first store, so we went next door into another one, the nicely named Zelta Zivtina (Little Goldfish), which I recall using when in Latvia for the summer in 2005. There we eventually understood that for only 3,99 Euro we could get a SIM card and unlimited texting and calling within Latvia for one month. Perfect! B couldn't believe how inexpensive it was - the phone plan was one of the few things for which we would pay so little money.

After taking care of that business we drank coffee and tea at Double Coffee, which is another Latvian chain worth investigating. Their cafes offer a full menu of drinks, as well as meals that I enjoyed on at least two occasions. Then we continued our errands by grocery shopping at Rimi.

At 3.30pm I called the airport baggage office and learned that - hallelujah! - our suitcases had arrived from Copenhagen. We drove to the airport to retrieve them, and were finally on our way - and began our Baltic roadtrip by driving to Kandava. 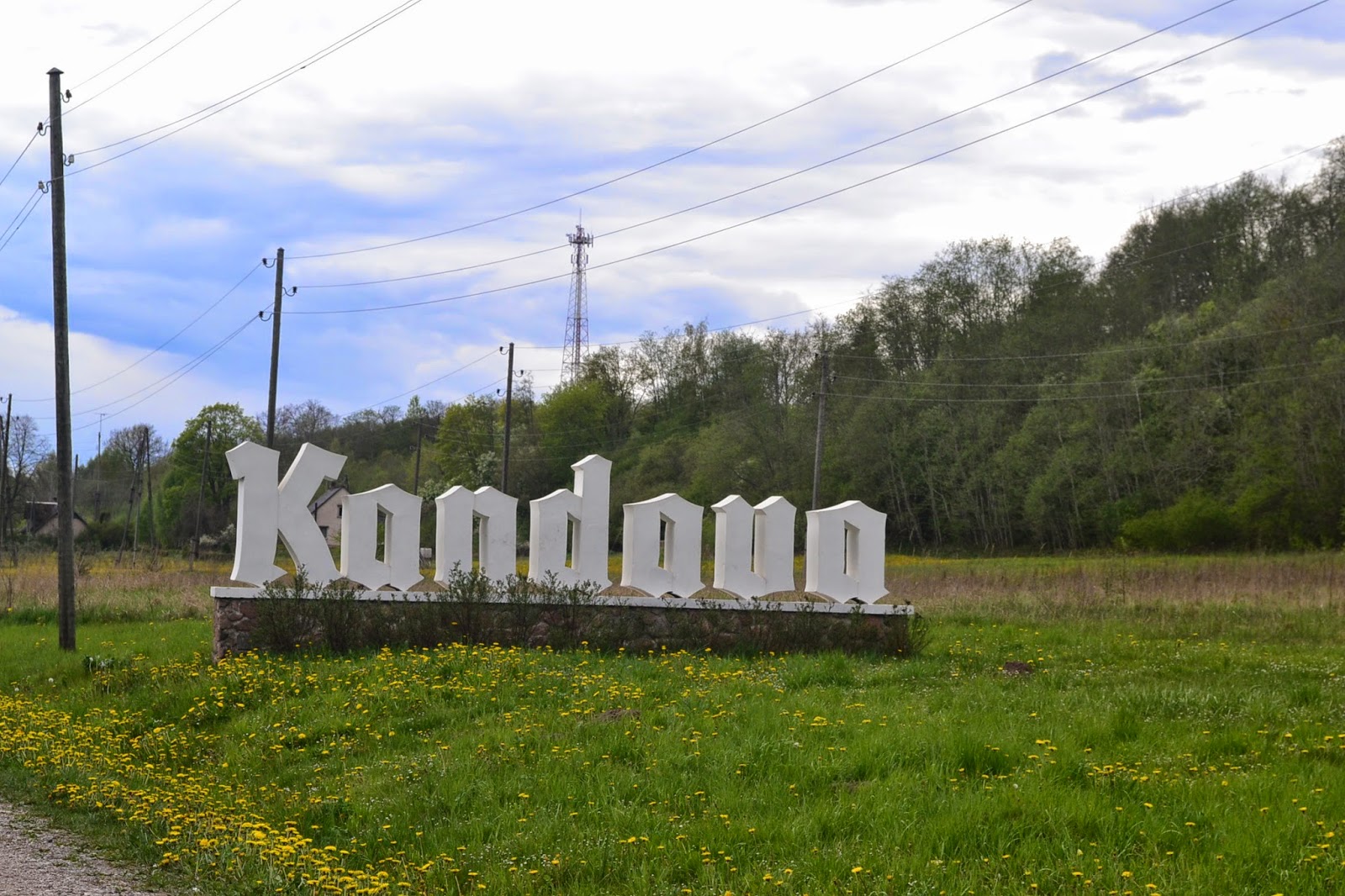 I had chosen this small town as our first stopping point, as it is only an hour+ drive from the airport, and the reviews for the guest house on Booking.com were outstanding. The reviews were right - if you ever need a place to crash in Kurzeme, but not far from Riga, I can highly recommend guesthouse "Pils." The small hotel is located on the main road, but Kandava is a tiny town, so it is quiet. The employees were quite friendly and helpful, the hotel itself clean and comfortable, and the restaurant served delicious food. We greatly enjoyed our dinner there - B had a fish dish, while I loved the shrimp avocado salad and homemade "frikadelu zupa" (a traditional Latvian soup with small pork meatballs and vegetables). The following morning our breakfast (included in the cost of the room) was also delicious: an enormous ham and cheese omelette, with a small side of cucumbers and tomatoes. We would see many more cukes and tomatoes over the next two weeks...

Before dinner we walked around Kandava for a while to investigate our surroundings and try to stave off jetlag. With the seven hour time difference between Washington and Latvia, 6pm in Kandava = 1am in Washington. 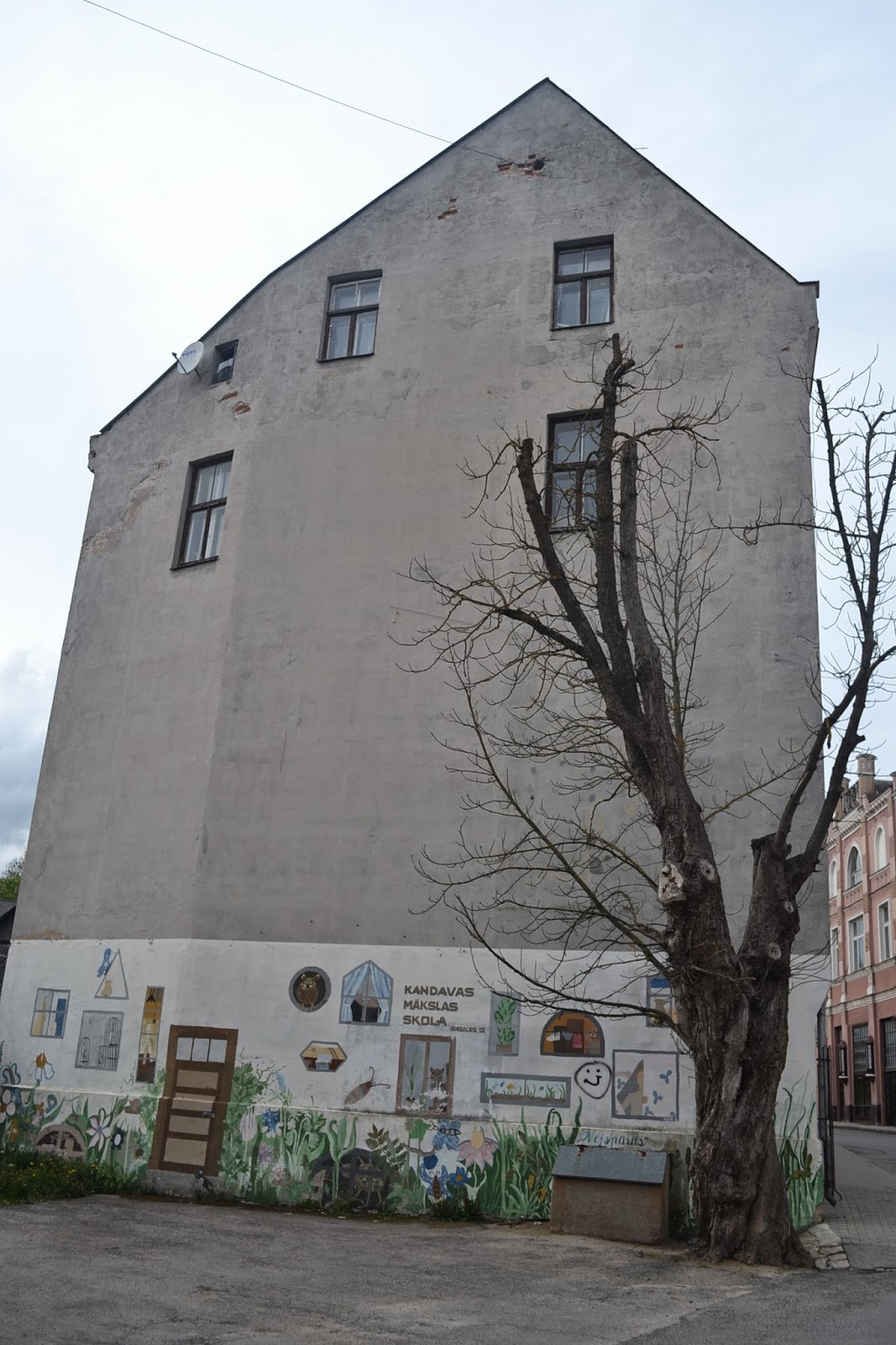