The Curonian Spit: A Lovely Day in Lithuania

In visiting the northwestern region of Lithuania, the spot I was most curious about was the Curonian Spit ("kuršu kāpas" in Latvian, "kuršių nerija" in Lithuanian).

The Spit was the goal for our first full day in Lithuania. To get there, one takes a small ferry from Klaipeda over the Curonian Lagoon. After some confusion regarding the location of the ferry and an unexpected tour of Klaipeda and its impressive shipping harbor, we found the correct spot, arriving in perfect time for the next ferry. The driver is included in the price of vehicle, which at the time of our crossing was 40 litas or about $16, but each additional passenger costs extra 2,90 litas or about $1. Check the ferry company's website for prices and times if you're planning a trip. The journey lasted all of about three minutes, so there is no need to budget a great deal of time for it if you are on a schedule!

The ferry arrives near the northern end of the Spit, so we headed south with the intention of driving its entire length. We had not expected to have to pay a fee based on car weight for a permit to drive on the Spit, but once that was taken care of (20 litas, or about $8), we were free to explore.

There had been a small forest fire on the Spit a few weeks previously, but it was not nearly as serious as the large fire which had burned in 2006.That area is clearly visible from one of the first pull-offs; it's reassuring to see the new trees growing and repopulating the forest.
The Spit is quite flat, and a bike path along its entire length (at least on the Lithuanian side) is almost finished. This would be an ideal vacation spot for someone who likes cycling and prefers an even terrain and seaside scenery. In some areas the Spit is so narrow that one catches glimpses of water on either side. The nature and scenery often reminded me of Michigan's Old Mission Peninsula or of Cape Cod in Massachusetts.

We stopped in the village of Juodkrante, and walked along the water, enjoying the view of both modern sculptures and traditional buildings. We climbed partway up "Raganu Kalnas" or Hill of Witches, to see only a small sampling of the 80 wood carvings based on Lithuanian folklore. 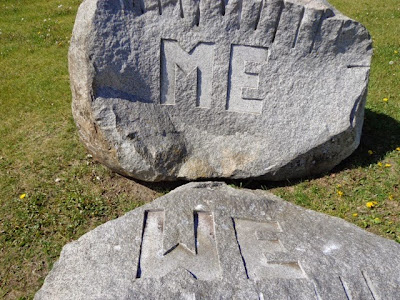 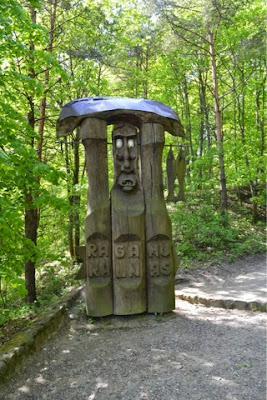 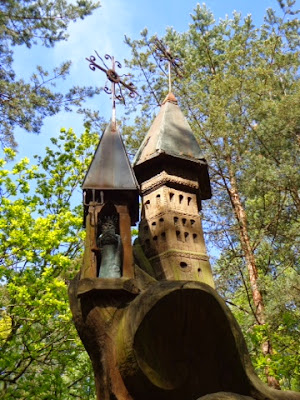 Continuing south, we drove to the Spit's largest town, Nida. Here we ate lunch, visited the tourist information office, then found the tiny post office to mail postcards. From there we ascended another slope to see one of the Spit's lighthouses, which is painted in cheery white and red stripes, and was surrounded by blooming lilac bushes.
Thanks to Bryan's mad map reading skills, we made our way back into a different part of town via pretty forest paths that seem to be used by all of the locals. I was interested in visiting an amber store about which I had read - it also doubles as a mini museum. Most of the pieces are for sale, while others are only on display, and there is also some information about the history and significance of amber. However, the small space was overwhelmed by older German tourists, all seemingly willing to open their wallets and spend their pensions on Baltic souvenirs. Thus, unfortunately we did not stay long, but the upside was that I was less tempted to purchase something! Prices seemed a tad high, but many of the jewelry pieces were beautiful and looked to be good quality.
Instead we walked toward the other end of town where the car was parked, and spent some litas at a souvenir booth near the center of the village. Bryan picked up two gorgeous wool blankets at an amazing price, while I scored some other traditional gifts (which I cannot mention in more detail because many of the recipients will only receive them later!).

Wanting to see what the Russian border looks like, we cruised toward that. We did not get all that close, but the Latvian cell phone company thought the border was about to be crossed, because an automated text message arrived, telling me how much both texts and calls would cost there. Although the Spit extends into Russia, the Lithuanian side is a popular vacation destination for Russians from Kaliningrad. I also suspect that Russians might drive through on their way to Klaipeda for shopping and the like. The most aggressive drivers on the Spit seemed to always be in cars with Russian license plates...
Heading back north, we made a coffee and dessert stop in Pervalka, one of the Spit's smallest villages. Bryan was surprised by the banana ice cream I was served, so I had to explain that bananas were an exotic and rarely available treat during Soviet times, and that the love for this fruit is still quite strong.

The other lighthouse was located near this village, but it would have required a bit of a hike, so instead we hopped back into the car and found an rea where many of the local storks and cormorants nest. The cacophany here was amazing, particularly because it seemed to be dinner time, and there were a great number of birds hanging out in their nests while other flew back and forth in search of food.
We also explored one of the area's beautiful beaches. Like many things in the Baltics, the beach we chose was a study in contrasts. The white stretch of sand was clean and peaceful, but to get there we first parked next to an old ugly abandoned building, then walked through an unattractive structure which seems to have been built as some type of lookout point back in the Soviet days. It really detracted from the simple beauty of the surrounding nature. 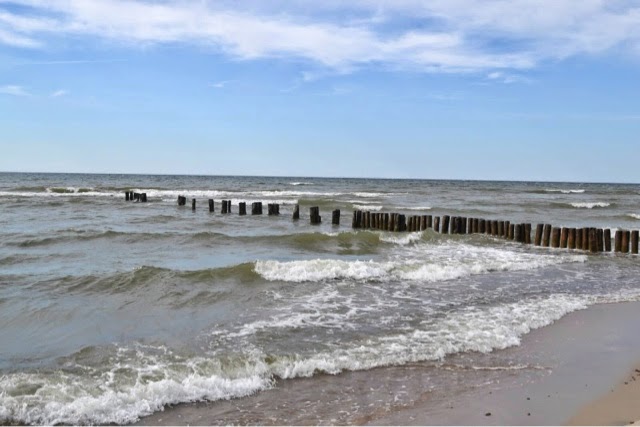 Before returning to the mainland, we ventured to the far northern tip of the Spit, where we found the aquarium (it was closed, but we could hear the seals barking), and several boats and traditional Lithuanian buildings in a small outdoor museum. I was most excited by the enormous bushes of fragrant lilacs. Having grown up in the Midwest where they are abundant, I miss the flowers' intoxicating spring scent in the DC area where there are very lilac bushes.It turned out that I was in the Baltics at the right time, as a bounty of lilac bushes could be seen both in cities and out in the countryside.
Posted by Dziesma at 6:00 AM