A Latvian Choir and Mikhail Baryshnikov

Latvia has many outstanding choirs, but one of the absolute best is the State Choir Latvija (aka The Latvian National Choir) with artistic director and conductor Maris Sirmais at its helm. When I heard they would be performing two concerts in New York City, I knew it was a great excuse to get back to that city. After consulting with extended family in NYC, I bought a ticket for the performance at the Baryshnikov Arts Center, and made travel plans. 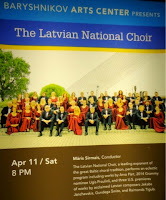 On the evening of the performance my cousin, his wife, and I took the subway into Manhattan from their home in Brooklyn, then walked about a half-mile until the BAC, it being located a bit off the beaten path in the area known as Hell's Kitchen. Upon walking into the entrance of the center, much to my delight I immediately spotted my friend Līvija, who had traveled Philadelphia for the concert. We had not seen one another in quite a while, so it was an incredibly pleasant surprise to meet her.

As many people know, Baryshnikov was born in Riga. In his role of founder of the arts center that bears his name, he has been supportive of Latvian artists, thus was not surprising to see him and his wife in the audience of the relatively intimate theater where the concert took place.

The choir was comprised of slightly more than fifty singers, and filled the space with their incredible voices. The program contained mostly contemporary Baltic composers, and most were pieces I heard for the first time. Although the songs were all listed in the program with English titles, a number were sung in other languages, including Latvian, Estonian and Polish.
This review does an excellent job describing the details! I agree that the less familiar composers definitely made an impression. Shall we just point out that Jēkabs Jančevskis was born in 1992, making him college-aged?

The piece that struck me the most was by Raimonds Tiguls, whose work I am somewhat familiar with, in particular the gorgeous Dod, Dievini!, which was sung at the Latvian Song Festival in 2013. Before the concert began I thought I noticed Tiguls sitting in the audience, and - indeed he was, as he participated in the performance of his piece by playing a unique instrument called the hang. Although this video features a different choir performing that piece, I urge you to watch (or at least listen to it), as you might also find it captivating.
After the end of the program and a standing ovation, the choir performed a rousing version of the folksong Rīga, Dimd!, then - after another insistent standing ovation - the evening was, like many Latvian events, closed with Pūt, Vejiņi!, a folksong that gained hymn-like status during Soviet Occupation. This video is of the performance of Pūt, Vejiņi! that evening - filmed with my not-so-new camera, thus I apologize for the less-than-stellar quality, but it is such a beautiful arrangement of the song, particularly the solo at the end.

My cousin, wife, and I had walked about two blocks back toward the subway stop before my realization that I had left my scarf in the theater. We returned, and I once again running into Līvija in the lobby, who told me that our friend Kristīne was also in attendance. While chatting with Līvija, I also met two other acquaintances, then went to find Kristīne, who was visiting NYC from Minnesota. It was so great to run into her, and as my cousin's wife had said while we were walking back to the center - I'd forgotten my scarf for a reason! 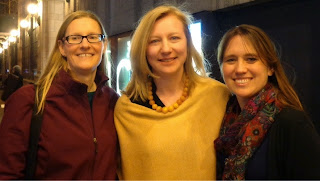 Overall, it was a magical evening, and I am grateful I could attend this performance. If you ever have the chance to see the Latvian National Choir perform, don't miss it!

A few weeks later exciting cultural news from Latvia: Baryshnikov is collaborating with Alvis Hermanis of the New Rīga Theater on a new play based on Nobel prize-winning poet Joseph Brodsky's poetry, with whom Baryshnikov was good friends. The play will run in Rīga in October, then tour the U.S. in 2016. Looks like I have at least one thing on my "to do" list for next year!
Posted by Dziesma at 10:39 AM