The Borough of Brooklyn, Part I

While the impetus for my long weekend in New York City was the concert, I was also looking forward to spending time with extended family and doing some leisurely city exploring. While most tourists and visitors spend the vast majority of or all of their time in Manhattan, I knew Brooklyn would be my main stomping ground, as that is where my cousin lives and also because this was far from my first NYC visit. (In case you didn't know, NYC is made up of five boroughs: in addition to Brooklyn and Manhattan, the others are Queens, the Bronx, and Staten Island.)

The last time I traveled to NYC, my adventures included walking across the Brooklyn Bridge (which has now become an incredibly popular tourist activity), experiencing the unique High Line Park, and seeing colorful bluebells, lilacs, rhododendrons, and tulips bloom in the lovely Brooklyn Botanic Garden, as well as visiting the impressive Brooklyn Museum, where I particularly enjoyed viewing Judy Chicago's The Dinner Party. 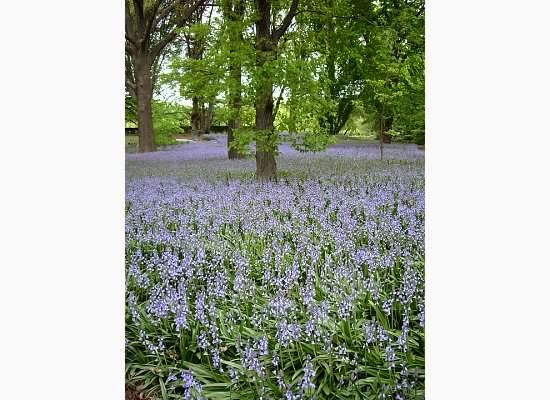 On this visit one afternoon was spent strolling through a corner of Prospect Park on our way to Green-Wood Cemetery, a sprawling graveyard with National Historic Landmark status, and which is the final resting place for a number of well-known individuals. It also boasts many impressive and interesting gravestones and great views, as well as an interesting history.
Green-wood was founded in 1838, and thus was one of the first rural cemeteries in this country. In just a couple of decades it had become well known for its beauty and as a prestigious location to be buried. The cemetery was so popular that it attracted a half-million visitors a year, and helped inspire creation of city parks such as New York's Central and Prospect Parks. 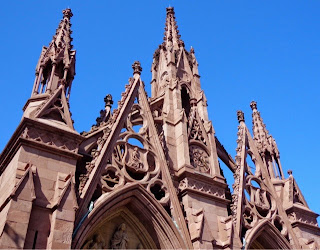 The entrance gate of the cemetery is stunning. Interestingly, a flock of parrots has lived its spires for many years. My camera could not do them justice, but for better photos of the bright green cuties, see this site.
The cemetery's chapel is also beautiful, with many gorgeous stained glass windows. My cousin mentioned that he has even seen weddings take place there. 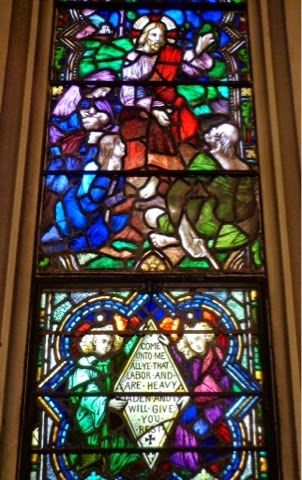 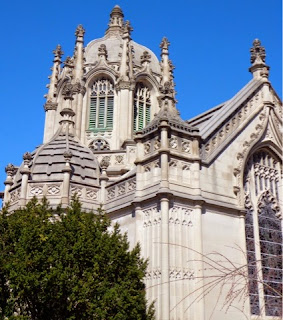 The land on which the cemetery is located played an important part in American history, as the Battle of Brooklyn was fought here. It was the first battle of the American Revolution after the Declaration of Independence, and also the largest battle in that war. Years later a wealthy businessman named Charles Higgins purchased lots on Battle Hill in Green-wood for his family tomb. He also had a plan for a monument to the Battle of Brooklyn, as he felt the battle was generally overlooked by historians. Thus, in front of his tomb stands the Altar of Liberty and a statue of Minerva, which salutes the Statue of Liberty.
The variety of tombs, monuments and gravestones in the cemetery was mind-boggling. From the simple to the over-the-top, it's all here. 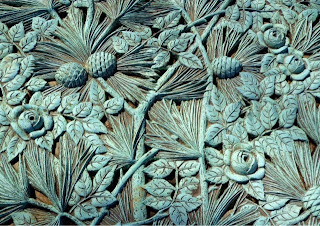